The college’s effort to provide greater choice and flexibility will extend to the design of the meal plan. Wheaton will introduce two new plan options for the 2015-2016 academic year.

At present, the details of the new meal plan options have not been finalized, but the intent is to complement the college’s existing carte blanche offering–which allows students to visit the dining halls as many times each day as they would like–with options that offer a fixed number of meals for the semester with an increased allotment of Lyon’s Bucks.

The new feature in the new plans will be “Lyon’s Swipes,” a new offering for getting a full meal at any of the college’s retail dining facilities (Emerson, Balfour-Hood Cafe and the Diana Davis Spencer ’60 Cafe).

In addition to the existing carte blanche meal plan, preliminary options for the two new offerings break down as follows:

The first meal plan option will include 225 meals per semester, enough to provide students with an average of two meals per day at either Chase or, via a Lyon’s Swipe, at one of the retail facilities. The option also will include $325 worth of Lyon’s Bucks, which can be used anywhere on campus for a la carte purchases.

The second plan would reduce the number of meals, or Lyons Swipes, to 150 (an average of one each day) with $500 worth of Lyon’s Bucks. 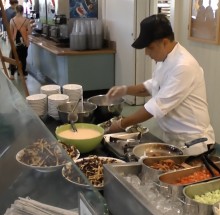