The secret to successful, spur-of-the-moment improvisation is practice. That may sound counterintuitive, but the members of the Dimple Divers, Wheaton’s improv comedy team, can vouch for its effectiveness.

“Like any art form, improvisation requires an immense amount of technique. There is a lot of practice and a lot of teamwork involved,” said Christopher Truini ’16, who is sometimes jokingly called the group’s figurehead president. The team practices four hours each week, running through exercises to build up their chops.

“One of my favorite things about the Dimple Divers is that it gives me four hours a week to laugh uproariously with a group of very funny and talented friends,” said Truini, a theater major from Roxbury, Conn., who has been part of the team since his first year at Wheaton.

Named after the quintessential Wheaton activity of sledding or sliding in the Dimple, the Dimple Divers formed roughly 20 years ago. The group has been a regular source of campus entertainment, from special shows for admitted students and alumnae/i to late-night shows the club organizes each semester. 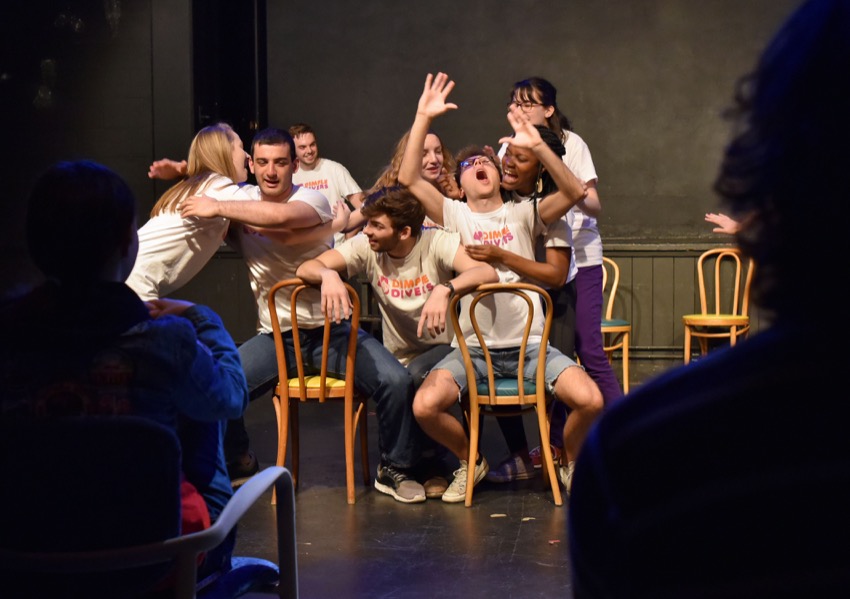 The team’s victory at the ImprovBoston comedy festival marked only the second time the Dimple Divers participated in the event, which is now in its 11th year, according to Mac Gostow, executive producer of the festival.

The Dimple Divers won a spot for the final round of the competition this year on the strength of their long-form story performance, members of the group said, winning a 58-point score out of a possible 60 points.

In the finals, the team was faced with responding to a prompt from the organizers that might best be described as playing charades before a live audience. Kennedy won her MVP honors for the way she incorporated the characteristics of a giraffe into playing a customer at a coffee shop (something you probably had to be there to fully appreciate).

“[The MVP award] came out of nowhere. I really didn’t expect that,” said Kennedy, a first-year student from Brooklyn, N.Y. “When the producer, Mac Gostow, started toward me with the award, I tried to move because I thought I was blocking the way.”

Members of the team say they decided early on to focus on being themselves, rather than doing something special in an attempt to win the prize. Judging an improv performance can be rather subjective, they said.

“The festival includes a competition,” Gostow said, “but it is less about the competition than it is about networking for the students, creating a sense of community among the teams, and providing a chance for everyone to learn from each other.”

Audrey Dubois ’17 said that the sense of camaraderie among the competitors, as well as within each team, made the event special.

“Performing for other college students and performers was great because we are all on the same wavelength,” said Dubois, a double major in English and philosophy from Scituate, R.I. “It was an incredible experience.”

Truini agreed. “The energy is so supportive. The real reason we go to the festival is for the community. What really made me proudest, having been on the Dimple Divers throughout my college career, wasn’t that we won the festival; it was that we did it our way.”