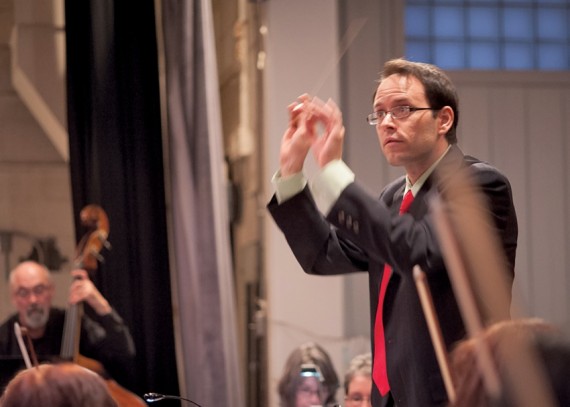 Assistant Professor of Music Delvyn Case, a composer of classical music, is a scholar who is most interested in popular music—in particular the intersections of popular music and religion in America. This fall, he is teaching the First-Year Seminar (FYS) “Rock of Ages: Images of Jesus in Popular Music,” which explores provocative questions about those intersections. With such an intriguing title, we, of course, just had to know more.

What initially sparked your interest in this area of scholarship?

The experience of teaching a course on popular music at a small Christian college (before I came to Wheaton)—a tricky task at a school where dancing was prohibited. I learned quickly about the host of complicated issues that arise when secular music comes into contact with a religious worldview.

Tell us about the focus and goals of your First Year Seminar (FYS).

The main goal of an FYS, of course, is to begin to equip students with the skills that we hope they will have by the time they eventually graduate from Wheaton: how to read critically, research effectively, think creatively and write clearly. But the goals of this particular course are threefold: to challenge students to think about popular music critically and to develop their ability to write about it; and to recognize that identity is “constructed,” i.e., what we know about any figure (real or imaginary) is created by the person who tells his or her story. That means that we should always be ready to question critically our knowledge and conception of that figure. This is true especially for Jesus, who did not leave any of his own writings, but whose significance in world culture is unmatched. Everything that we know about him comes from others: those who wrote about him (in the Bible), the artists who painted him, and the musicians who told (and still tell) his story in song. This includes not just Bach and Mozart, but also popular musicians like Bono and Bob Dylan.

What led to the idea of this FYS? Was there a particular piece of music that inspired you?

“Jesus Walks,” from Kanye West’s first album. It’s an inspiring song that takes Jesus’s traditional, biblical ministry—among the poor in first-century Palestine—and translates it to today’s world. The song talks about how Jesus cares for those on the margins of society today: in Kanye’s words, “The hustlers, drug dealers, even the strippers— Jesus walks with them.” It’s a very biblically orthodox message. But the song was very controversial. That led me to explore other “secular” songs in which Jesus appeared as a character. And I discovered that there are so many. I realized that I could use pop songs to show students not only that the image or identity of Jesus is constructed in many different ways in popular culture, but also that this very notion of “constructedness” is not just some academic concept but extremely relevant.

How does this relate to your scholarship and coursework at Wheaton?

I compose a lot of sacred music, but it is within the contemporary classical genre, not pop songs. But in each of those pieces, I am doing the same thing that Kanye West is doing: representing a biblical image in a music idiom. So the thought process is the same; it’s just that the musical style is different—and my music doesn’t make me rich.

Are you a big Kanye West fan?

I’m interested in him as a producer and rapper but not as a media figure.

Is Jesus a big part of contemporary secular music?

He shows up in so many songs these days. “Jesus, Take the Wheel” is an obvious one, but a less obvious one is “Viva La Vida” by Coldplay, which is all about him, too.

Will you be assigning music for students to listen to?

We study various genres each week, but the students’ final projects are based upon songs and artists of their own choosing.

On a broader scale, how does exploring this subject matter benefit the general public?

Our lives are powerfully influenced by mythical figures, real or imagined. A good example is Abraham Lincoln. Our country’s self-definition is in no small part determined by our image of him and his ideals, and that in turn affects policy. Yet everything we know about him is through historians’ or biographers’ interpretations—or our own, possibly flawed, interpretation of his own writings. So in a sense, our national story is based upon the process that I encourage my students to learn in this class: how to seriously yet humbly interrogate the images given to us of an important figure, in order to develop an authentic, composite image that will give guidance to our thoughts and actions in the future.