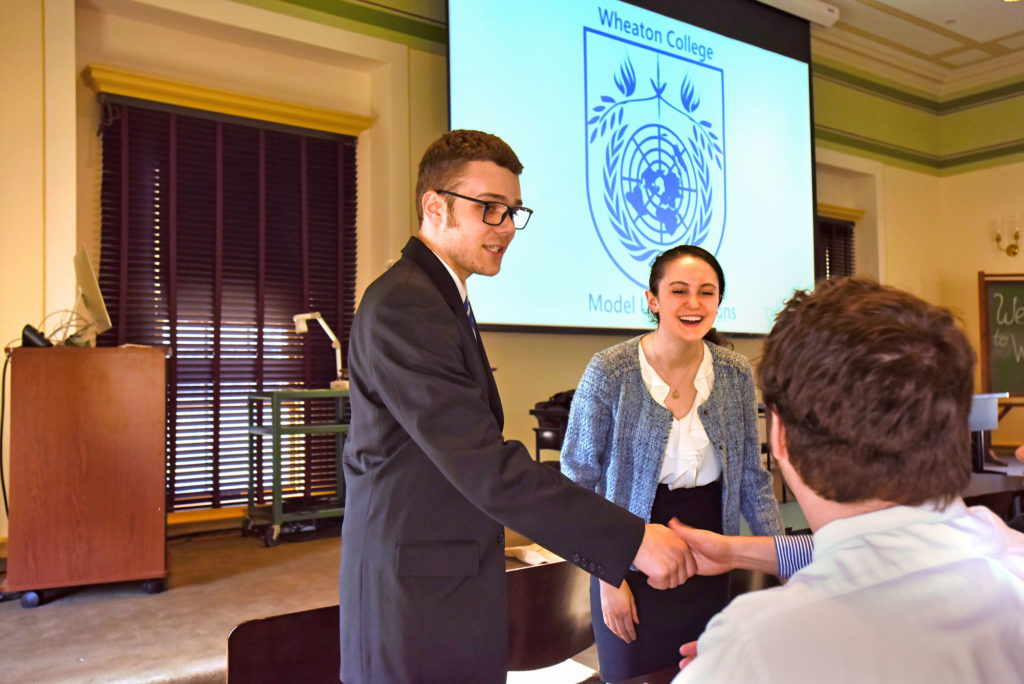 Before coming to Wheaton College, Joseph Perez ’20 had not even heard of Model United Nations  (UN) clubs. But on Saturday, April 6, there he was, along with his Wheaton Model UN team members, taking the lead on hosting a major conference that brought to campus high school students from the New England area for mock debate and crisis management on global issues.

The WheaMUN Conference, which was also hosted at Wheaton in 2017, gives high school students the opportunity to gain debate, research and public speaking experience and develop policy-writing skills with the framework of their assigned committees.

“These are the skills that can help empower students to make positive change,” said Perez. He served as the secretary general for the conference (the traditional title for the lead organizer) and worked closely with Casey Smith ’20, the co-head delegate of the Model UN. 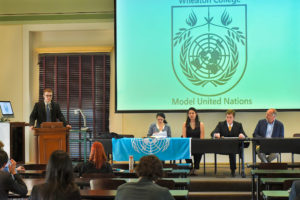 For Wheaton Model UN members, organizing the conference provided an opportunity to hone their own leadership, decision-making and collaboration skills.

Perez was responsible for coordinating marketing, funding and logistics. “This does not mean I have done it alone,” he pointed out. “I worked very closely with other Model UN members who were invaluable in helping with various aspects of this conference. I also received help from various departments at Wheaton, including SAIL, Admission and Campus Safety.”

Perez, a double major in economics and political science, even learned a lot about his own leadership style and how to adjust it when necessary.

“For me, this has been a lesson in learning when to delegate responsibilities to other people. I have a tendency to try to do everything myself,” Perez said. “With an event of this size and complexity, it was crucial to work together and delegate certain tasks and trust that the people who were assigned with tasks would carry them out well.”

On Saturday, Perez move about campus checking on the progress of sessions held in Mary Lyon Hall and Meneely. This year’s event focused on a Pan-African Congress in which delegates represented one of the African nations at the 1963 Summit Conference of Independent African States to discuss the possibility of creating a Pan-African union or other ways of achieving independence from colonialism; and a 19th century Argentina crisis committee in which each delegate represented  a historical actor in the 1834 post-independence Argentinian power struggle competing to gain power and restructure the Argentinian government to their respective character’s liking. 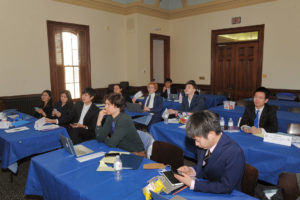 “Organizing this conference has helped me to improve my abilities to coordinate a team of people to accomplish a large, long-term project. This is the sort of thing that I will probably face down the road in my career,” Perez said. “If I were to go into regional or city planning, putting together events to engage the community and explain new ideas will be an important part of the job. This conference can be seen as the best practice possible for this,” he said.

Other Wheaton Model UN members helped brainstorm ideas for guest speakers and used their connections to book them.

For example, Jeremy Holt ’20, who has worked with Nosapo, Inc., a Boston area nonprofit focused on human rights education, tapped into his contacts to invite Melanie McCarthy, the organization’s founder and executive director, to speak at the conference.

As co-head delegate of the Model UN team, Smith helps lead conferences and training and organizes the team as a whole. For Saturday’s event, she collaborated with Perez on all tasks to make sure things went as smoothly as possible. She also served as the chair for the Argentina crisis committee.

“My time at Wheaton has definitely helped me to prepare for this conference, especially my work as the civic engagement intern in the Center for Social Justice and Community Impact. I feel that this work has given me a lot of perspective on ways to motivate students as well as an ability to reconsider my strategies for organizing.”

The conference also has helped Smith, a triple major in history, secondary education and Russian studies, with her future goals.  “As a future educator, I think it’s very important that I be able to think about lesson planning, learning outcomes, and what will best benefit my students,” she said. “This conference has made me consider what would allow these high school students get the most out their experience.”