In this role, the alumna from Scarborough, Maine, will spread a message encouraging civic engagement among women. She also will serve as goodwill ambassador to the Children’s Miracle Network, Miss America’s nonprofit partner.

Elliott is gearing up to compete in the Miss America pageant in Atlantic City, N.J., next month (airing on ABC, September 10).

“It’s a weird, strange feeling. It doesn’t feel like it’s my life, but there are small moments I realize it’s real,” said Elliott, who previously was crowned Miss Maine Outstanding Teen. “I just got back from Florida, where I got to meet all the contestants, which has made me more excited. They’re all such kind and genuine people. It’s going to be the experience of a lifetime.”

A psychology major and political science minor at Wheaton, Elliott served in the college’s Student Government Association (SGA) during all four years as an undergraduate.

Her first year at Wheaton, Elliott was elected class senator in the SGA, and by senior year she had worked her way up to president.

“I fell in love with being part of the advocacy body for Wheaton students. It was one of the best things I could have done,” she said. “The leadership positions challenged me, and I learned about myself and where I wanted to see student leadership go.”

While on the SGA, Elliott helped pass legislation so students could keep their email addresses post-graduation and led an initiative to fund water filter stations and disseminate 1,000 reusable water bottles (designed by students, with Wheaton branding). She also worked on restructuring the SGA to better manage the 50-member group by reducing its number of committees so “students were serving on fewer committees, but the ones they were on, they were doing them well.”

“It was good for morality, and for the student body,” she said.

Elliott credited Kate McCaffrey, vice president for student affairs and dean of students, for her success on the SGA, and as a student.

The affection goes both ways.

“It was a pleasure working with her and watching her grow as a leader. She has high expectations for herself and holds her peers to the same high standards,” McCaffrey said.

“She served as a student representative to help shape a strategic plan for mental health and wellness services, programming and education for students—much of which will continue to be implemented this academic year due to the work of the task force in which Katie was involved,” Kenny said.

Elliott said she looks forward to the next chapter as Miss Maine (and possibly Miss America).

She will spotlight issues such as low voter turnout and the lack of diversity (and competition) in political races—and most essentially, the small percentage of women running for government.

“There has never been a Maine governor who is a woman. When you don’t see it, you can’t be it. That is one of the reasons I wanted to take on this issue,” she said. “

“We’re expected to talk eloquently and non-offensively about difficult issues,” she said. “But the Wheaton experience really propelled me for that, because I was used to having those hard conversations.”

She also will showcase her talent for singing—which she honed as a four-year member of the Wheaton Whims. (During her senior year at Wheaton, she wrote, arranged and performed music with help from Professor Tim Harbold.)

Elliott has seen several academic benefits to pageants. Winning Miss Maine Outstanding Teen as a high schooler provided her with scholarship money to attend college. (She noted that Miss America gives out $16 million in scholarship money to women every year.) The pageants also gave her a platform to advocate for what she believes in, which has helped boost her confidence.

Looking forward, Elliott—who interned at Sen. Susan Collins (R-Maine) office as a Wheaton student—plans to get involved in the 2018 gubernatorial races. She hopes to work on campaigns and supply expertise on how branding affects public opinion.

She also someday wants to advocate for veterans. As an intern with Sen. Collins, she offered guidance on accessing services, particularly health care, to the large population of veterans in the state of Maine—and she hopes to continue with that work.

Elliott hasn’t ruled out running for office someday herself.

“In the future, I would be interested in running for office, but for now, my focus is connecting with people in the state and country; making a difference with kids with terminal illness; and encouraging girls to run for political office,” she said. 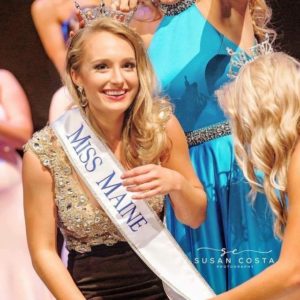 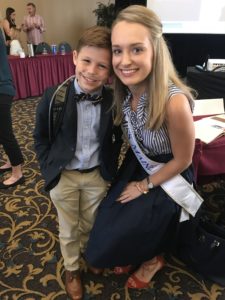