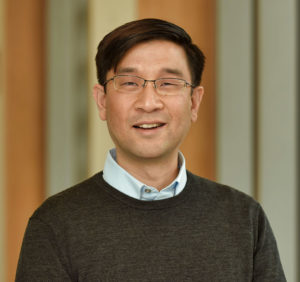 Why I became an educator: “As a new teaching assistant at UC Berkeley, I discovered that I really enjoyed helping students think about their long-term goals and seeing them grow intellectually and personally. Teaching at the undergraduate level gives me the opportunity to work with students at a crucial time in their lives, when they face the excitement of new possibilities and the weight of new responsibilities. It is deeply gratifying to see my students succeed in finding their vocations and to know that I have played some part in that success.”

What led me to my field: “Growing up, I was enthralled by my grandparents’ stories about their experiences in China during World War II, when they served with a joint U.S.-Chinese unit under the U.S. Office of Strategic Services. My grandmother, Jeanne, was a nurse, while my grandfather, Luis, was an interpreter and aide to the commanding officer, Captain John Alsop. In 1945, my grandfather saved the unit from an ambush. In gratitude, Captain Alsop helped my grandparents and their family immigrate to the United States. It was a journey that led them from southern China to Hong Kong, Taiwan, Brazil and, finally, Newington, Conn. From early on, I learned that my life was profoundly shaped by history and politics. In college, I studied international relations and Asian politics because I wanted to go deeper into the story, looking into the future as well as the past. Regional politics in Asia fascinates me because it is so diverse and dynamic, but I also feel personally invested in how the region’s history and relationship with the United States are unfolding.”

My current research focus: “I currently study ‘pariah states’—countries that are ostracized for violating norms such as human rights or nuclear nonproliferation—and how and why they decide to remain pariahs or pursue reform and opening. I also research how the Catholic church shapes the implementation of human rights norms, particularly in the Philippines. I am interested in how the church’s ability to act simultaneously as a state, a global NGO and a local religious institution can influence how human rights are received at the domestic level.”

Why I chose Wheaton: “I was drawn to Wheaton because of its commitment to teaching the liberal arts. At its best, a liberal arts education trains students to see clearly both the world as it is and as it could be, to reject cynicism and fatalism, and to use their unique talents for humanity’s benefit. It is a fundamentally optimistic enterprise. At Wheaton, I can feel that optimism in my colleagues’ passion for their craft as teachers and in students’ enthusiasm to learn, grow and contribute to something larger than themselves. It is an exhilarating place to be.”

Most important lesson I learned in college: “I once took a jazz improvisation class. With little background in music theory, I struggled all semester. During the final exam [a public recital], I was on piano and lost my place with the rest of the band. I almost panicked, but our professor, Andy Jaffe, had constantly reminded us that, “You’re never more than a half-step away from the truth,” meaning that there was always a way to play oneself out of a mistake. That lesson helped me to stay calm and gave me confidence to improvise and recover from my missteps. It has since served me well in many different contexts.”

What I want every student to learn: “Don’t fear complexity; embrace it. Everything is interrelated. The world does not neatly separate history from psychology, literature from politics, natural science from philosophy, or mathematics from language. Sometimes, how you learn is more important than what you learn.”

What few people know about me: “I am an amateur voice actor. I’ve recorded and mixed my own dramatic readings of Charles Dickens’ ‘A Christmas Carol,’ Edgar Allen Poe’s ‘The Cask of Amontillado” and others, and narrated documentary videos for a Philippine disaster relief NGO. I’m currently recording some Shel Silverstein poems for my 11-month-old son.”

Return to main story and read about other new tenure-track faculty.