George Kunhardt ’09 came to Wheaton College on February 10, 2017, to share his insider filmmaker’s perspective on making documentaries and to screen his most recent HBO project, Becoming Warren Buffett, in Ellison Lecture Hall.

Kunhardt had lunch and a Q&A session with interested students, primarily film and new media studies majors. Some students who attended were from Assistant Professor of Filmmaking Patrick Johnson’s “Documentary Storytelling” class.

“George talked about a vast range of subjects—the process of making of the movie; how Kunhardt Films convinced Buffet to let them make the film; how Buffett [the legendary investor and philanthropist] received it; what a documentary producer does; and how HBO Documentaries works. He also offered advice for current students,” said Johnson.

Kunhardt recently won an Emmy for his work as a producer on the HBO documentary Jim: The James Foley Story.

His wife, Jackie Phillips Kunhardt ’09, also a Wheaton alum, accompanied him on the visit. 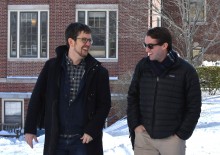