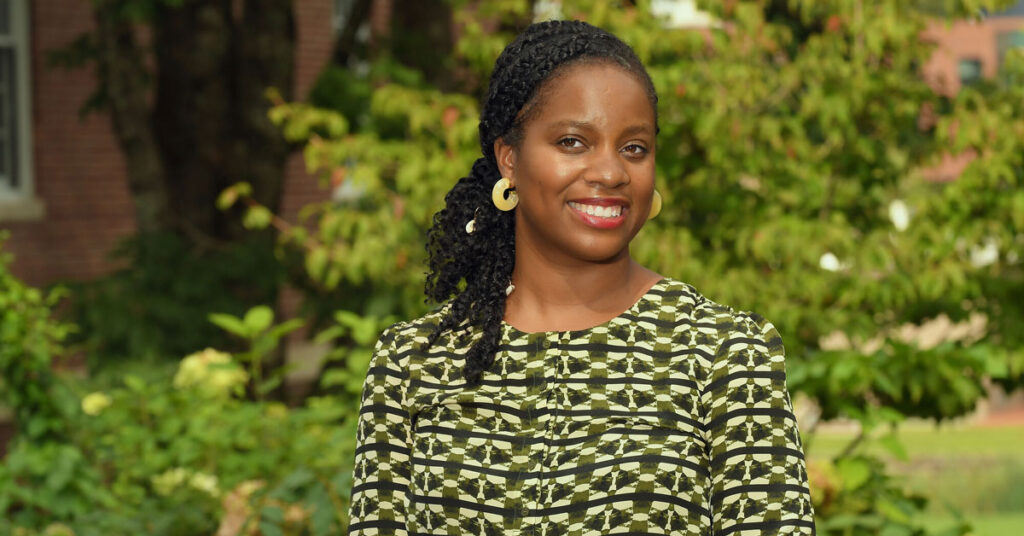 Why I became an educator: “I learned to teach—and to love teaching—during a brief but impactful stint as a kindergarten teacher in a high-needs urban school district. It was without a doubt the most challenging teaching experience of my life. But, in between the trials and tribulations were magic moments when I connected with my young students and watched their faces light up with joy and understanding.

“The college classroom is different in many respects, of course, but some things remain the same. Students, regardless of age or skill level, are generally curious and motivated to learn once they connect to a subject. As an educator, I feel privileged to accompany my students on their journeys and to bear witness to their growth.”

What led me to my field: “I majored in philosophy in college, but left wanting to know more about the philosophical traditions of my cultures [African American and Caribbean]. After graduation, I ventured to Cuba for a year to study film and ended up becoming more fascinated by the Afro-Cubans whom I befriended, whose culture was both unique and similar to my own. This fascination led me to graduate school, where I completed a master’s degree and Ph.D. in comparative literature, with a focus on the literature of the African Diaspora in English, Spanish and French.”

My current research focus: “My current research focuses on migration, memoir and music in African Diasporic literature. I am intrigued by how writers and songwriters narrate their geographic and metaphysical journeys through written works. How does the musicality of African Diasporic cultural traditions inform the ways in which writers remember and transcribe their experiences?

“The question intrigues me because music is both conduit as well as matter; form and substance. African Diasporic writers use music to convey their stories while simultaneously recasting stories and memories through song. This obscuring of memory and reality through music is not gratuitous; it enables people to withstand oppression by exercising creative control over their narratives, thereby asserting their agency. I am interested in how this dynamic plays out in African American and Caribbean diasporic memoirs and popular music genres of the late 20th century.”

Most important lesson I learned in college: “The most valuable lesson I learned in college comes from my experiences outside of the classroom. I found my coursework interesting, but I wanted to know more. I attended workshops, lectures, took dance classes, went to performances, screenings and events. I learned that intellectual communities unfold in multiple ways and spaces, and academic institutions are an extraordinary repository of those energies. Moreover, I began to see myself as not just a student, but as a contributor to those spaces, which expanded my sense of self and of the world around me.”

What I want every student to learn: “I want every student to learn to take risks and to learn to love the journey. If you’re on the fence about taking a course or attending an event or participating in an extracurricular activity, my advice is to just do it. No matter what happens, you will grow by taking risks and by immersing yourself in the richness of your college experience.”

What few people know about me: “I am named after my grandmother, who passed away shortly before my birth. Some time ago, I learned from my mother that she dreamed of writing a book. I marvel at the fact that she had no tertiary education, but enough self-regard to dream so boldly. Dreams are invaluable, even if they are deferred.”

What I’m most excited about teaching this academic year: “This fall I am teaching ‘Caribbean Literature and Popular Culture.’ I am excited about this course because it incorporates a focus on oral traditions and popular music genres of the Caribbean, such as reggae, calypso, soca and dancehall, which students tend to enjoy as well.

“In the spring, I will be teaching a course titled ‘Hip Hop, Spoken Word, and Black Poetics.’ Once again, I am excited about this course because it is interdisciplinary, and hip hop and spoken word provide an excellent segue into discussions of African American literature, philosophy and culture.”