The Lyons hit the ground running in every sport during the fall and winter seasons. Here are some moments that made us Lyons roar. And speaking of roaring Lyons, our beloved mascot got an official name, thanks to suggestions from the Wheaton community.

Johnston breaks 100 IM record
Senior Ross Johnston led the way for the Wheaton men’s swimming and diving team against the Bridgewater State University Bears on November 9 when he broke his own record in the 100-yard individual medley race, timing in a final of 55.20. The Lyons defeated the Bears 160.5–73.5.

Lyons sweep Emerson 9–0
The women’s tennis team swept the Emerson College Lions, 9–0, on September 20, at the Clark Tennis Courts. Sophomore Ines de Bracamonte and first-year Isabelle Garvanne led the Lyons in the doubles No. 1 spot with an 8–4 win over Emerson. First-year Harley Swainston and junior Jodi Katz followed up with a 8–3 victory in the No. 2 spot, while sophomore Connor O’Keefe and junior Arielle Klopsis finished 8–4 in No. 3. Opening singles action, de Bracamonte completed with a 6–3, 6–1 final mark at No. 1; Garvanne concluded at 6–2, 6–3 in No. 2; and Katz, O’Keefe, Swainston and Klopsis all registered wins to complete the 9–0 sweep for Wheaton.

Field hockey comes from behind to defeat Regis 3–1
After falling behind early, the field hockey team battled back to defeat host Regis College 3–1 on September 2, collecting its first win of the season. Anchored in goal by junior Riley Thompson, the Lyons put together a strong defensive effort to go with a strong attacking presence. Thompson split time in goal with freshman Morgan Karnes, with Thompson making two saves in 53 minutes of action. Karnes was unchallenged.

Offensively, the Lyons outshot the Pride 23–5, while holding a 12–5 advantage in penalty corners. One of the Pride’s five shots made its way into goal after just four minutes of play. The Lyons shifted the momentum in their favor toward the end of the first half, resulting in a goal by sophomore JoAnn Bourgoin. Bourgoin’s first goal of the season came with 5:46 remaining in the half after a rebound made its way to the forward. Wheaton came out quick in the second half, with senior Amelia Gage handing the Lyons the lead just three minutes in. After a scramble in front of the net, junior Kelsey Buckley chipped one over to Gage, who fired it into the net. Buckley added an insurance goal, deflecting a shot from Bourgoin into the cage for the game’s final goal. 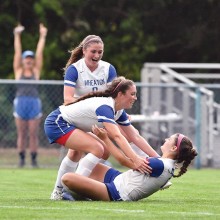 Lyons overcome two-goal deficit to defeat Curry 4–3
Lyon first-year forward Lily Scammon scored the first game-winning goal of her career to lift the women’s soccer team to a thrilling 4–3 come-from-behind victory over visiting Curry College on September 7, at Christina Mirrione ’99 Stadium. With the game tied at 3–3, six minutes left in regulation time and the Lyons pushing the pace, Scammon gathered the ball on the right side of the field. The first-year raced past the Curry defense and fired the ball across the frame, past a diving goalkeeper.

Call for Hall of Fame nominations

The Department of Athletics is seeking nominations for the 2017 Wheaton College Athletics Yowell Hall of Fame. The Yowell Hall of Fame honors and gives lasting recognition to individuals who, either through participation, support or interest, have made outstanding contributions in the athletics arena, and specifically to the Wheaton athletics program. The nomination form can be found at here. 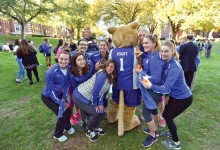 Hello, my name is…

After hundreds of suggested names were offered for the Wheaton Lyons mascot, the nominations were narrowed down by a mascot-naming committee. Votes were tabulated, and the Lyon’s name was unveiled on October 14, in the Dimple, as part of Fall Fest. So, Roary it is.
—Wheaton Athletics
Photos by Keith Nordstrom