Each May at Commencement, Wheaton sends graduates off into the world to pursue their hopes, dreams and careers. Judging by a survey of the most recent graduates, the members of the Class of 2014 are doing well. Ninety-eight percent of those who responded have been successful in achieving their professional aspirations within six months of graduating from Wheaton. 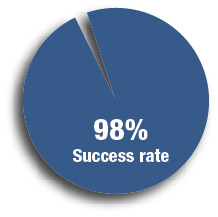 63% Employed
22% Graduate or professional school
6% Volunteer and National service (including AmeriCorps, City Year)
4% Fellowships–Fulbright (9), Watson (2), other (2)
Data based on a knowledge rate of 70 percent for the Class of 2014

“Results like this compare favorably to any institution in the country. Wheaton continues to attract great students who do amazing things while they are here and after they graduate,” said Wheaton College President Dennis M. Hanno. “What’s impressive is the variety of ways that our newest graduates find success. That speaks to both the quality and flexibility of our programs, and most importantly, it affirms the value of a Wheaton education.”

The National Association of Colleges and Employers (NACE) is collecting data from institutions of higher education that volunteer the information. NACE is the leading source of information on the employment of college graduates. It also forecasts trends in the job market, and tracks starting salaries, and recruiting and hiring practices.

Wheaton’s survey results will become a part of the national picture on outcomes in higher education, and the college will be able to benchmark its own results against similar colleges.

“In looking at a few studies like this from other colleges, we are above average on full-time employment, graduate school participation, and service and fellowships,” said Paul Prewitt-Freilino, director of institutional research at Wheaton. “The NACE standard is to uncover information on 65 percent of alumni. Wheaton hit a 70 percent knowledge rate in this first comprehensive effort that gathered data from many sources.”

Starting in fall 2014, the Office of Institutional Research, the Office of the Registrar, the Filene Center for Academic Advising and Career Services, the Advancement Division, and faculty members collaborated to collect and examine data from senior exit surveys. Social media resources, including LinkedIn and Facebook, and follow-up print mailings and emails also were used to gather information. And the National Student Clearinghouse of registrar data was used to check for graduate school enrollment.

“There is a great deal of discussion and pressure on colleges to demonstrate employment or graduate school outcomes. This pressure is from the media, the general public, and state and federal government officials,” said Prewitt-Freilino.

“President Obama’s efforts to design a college ranking system to assess the value of various colleges and even tie federal student aid to performance is an ongoing effort. And accreditation organizations like the New England Association of Schools and Colleges ask colleges to address these outcomes in their self-studies for continued accreditation. It is important for the college to ensure that graduates have the preparation to achieve their professional goals. Wheaton also wants to document the college’s success in preparing students for life after college.”