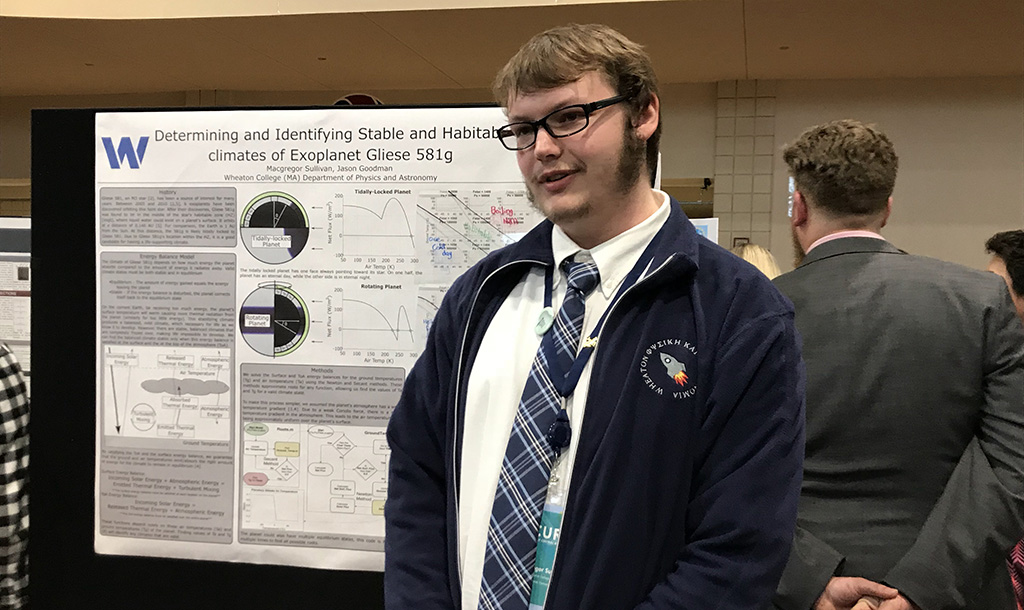 Searching the skies. I have been interested in studying exoplanets during my time at Wheaton. Understanding these distant alien worlds has been a large motivation during my college career. Earlier this year I wanted to do an honors thesis, so I went to professor Jason Goodman and asked him if he had any good ideas. He suggested a paper about eyeball earths—planets where one side always faces the sun around which it revolves—and I was immediately intrigued.

From a distance. As far as we know, Earth is the only place in the universe where life exists. However, over the past few decades, we have discovered hundreds of planets outside our solar system, some of which exist in conditions similar to Earth. What fascinates me is that we can look at a dim dot in the sky, and we can figure out its atmospheric composition, its temperature, and whether life as we know it could thrive there.

Making models. I developed a climate model for Gliese 581g, an “eyeball earth,” to identify the atmospheric conditions that support liquid water on the planet’s surface. I had never created a climate model before, nor have I even looked into the science behind it. While my model could be a thousand times more complicated, I am surprised how decent a solution you get with some simple approximations.

Surprising finds. Time management is an important part of such a long project. Between learning the science, computer coding, making figures, and writing, there is always something that has to be done. I also was able to improve my technical skills, such as bug fixing and problem solving, optimizing code and creating figures (which was a first for me).

Physics major Macgregor Sullivan ’18 focuses on attempting to build a clear picture of worlds beyond our solar system. A resident of Newtown, Conn., Sullivan plans to pursue internships in physics and software engineering after graduation while considering graduate school options.