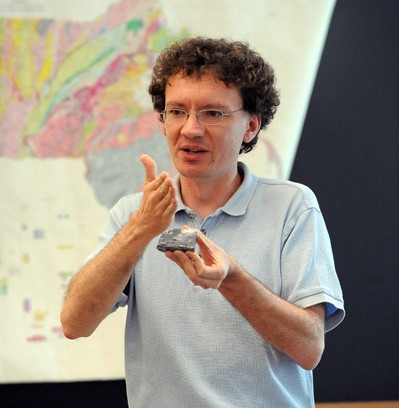 A team of Wheaton students and a professor has received funding to continue the investigation into whether the surface of one of Jupiter’s moons is being shaped by plate tectonic activity, like Earth.

Physics professor Geoffrey Collins is part of a team that recently won a grant from NASA to revisit old data in the light of the new theory. The award provides over $132,000 to Wheaton for Professor Collins and students to look more closely at the evidence of possible plate tectonic activity on Europa.  The grant funding allows Professor Collins to devote more time to the research project, hire student research assistants, and for the Wheaton research team to present their work at conferences.

Planetary geologists Simon Kattenhorn, of the University of Idaho, Moscow, and Louise Prockter, of the Johns Hopkins University Applied Physics Laboratory in Laurel, Maryland, pointed out evidence for plate tectonics on Europa last fall in an article published in the journal Nature Geoscience.

Plate tectonics is the scientific theory that Earth’s outer layer is made up of plates or blocks that move, geological activity that leads to the formation of mountains and volcanoes and sets off earthquakes. The new observations on Europa provide the first solid evidence that this geologic process may also occur beyond the Earth.

The NASA-funded research group of which Collins is a member is led by Louise Prockter, and includes Kattenhorn and other experts on Europa tectonics and terrestrial plate tectonics. Professor Collins and his students will primarily work on applying some new research tools to examine the icy moon.

“Basically we’re taking some standard techniques for looking at plate motions on the Earth and then mixing it with a technique for determining relative motion on Europa,” Professor Collins said. “The relative motion technique was originally pioneered by a couple of my research students over a decade ago, Jon McBee ’04 and Dan Hartmann ’04, and was later perfected by Simon Kattenhorn and one of his graduate students.  We’re working on streamlining this into a tool within our GIS system that we can use on Europa data from the Galileo spacecraft.”

The project represents just the latest research award that Collins has brought to the college. He and colleague Jason Goodman, also a professor of physics at Wheaton, won a $280,000 grant to study icy worlds such as Europa for insights into the origins, evolution, distribution and future of life in the universe.