Eliza Wheaton’s carriage sparkled in the sunlight as it sat in the parking lot at the Presidents’ House one morning, surrounded by admirers at a staff kick-off event.

After being off the road and tucked away for decades, this 19th-century vehicle looks brand new, thanks to an extensive restoration project initiated by President Dennis M. Hanno that involved a collaboration with the college archivist, local residents and a skilled Amish carriage maker in Pennsylvania. See gallery below.

Mrs. Wheaton’s ride was manufactured by Brownell & Burt of Taunton, Mass., in the 1800s. “From what we can determine from reading her [transcribed] diaries, the carriage was purchased in 1876,” said Kate Boylan ’04, director of archives and digital initiatives. “Eliza and the family used the ‘buggy’ for transportation and errands. Eliza would often hold meetings while riding in the carriage.”

Hanno, who has lived in her residence since becoming president in 2014, noted why it was important to spruce up the carriage.

“This carriage was a big part of her life, just like this house is,” he said. “We preserve the house because it was a big part of her life and the history of the college. Here’s another slice of it. It is rare for something like this to even still be around. The restoration is in honor of her and the fact that she was a woman way ahead of her time.”

The easy road would have been to let it go, but Hanno took the more complicated route.

“The college needed to make a decision to either give the carriage to the historical society so it could be insured or take it back,” Hanno said. “I said, ‘we can’t give that away; it’s a piece of history.’”

The wild ride from then to now has had many twists and turns. In fall 2018, former Norton Board of Selectman Bob Kimball helped get the carriage from Middleboro to Norton. (It measures 11-feet long by about 6-feet wide and 7 ½-feet tall, and takes at least four people to lift it for transport.)

Samuel Arena, a member of the Norton Historic District Commission, stored the carriage in his heated garage for the winter until it was brought to campus.

“I was born in Norton and I’ve watched Wheaton evolve,” he said.” I just enjoyed being a part of the restoration project. It’s an amazing piece of history that was just hanging around all these years.”

In May 2019, the carriage was put on display outside of Mary Lyon during Commencement Reunion Weekend.

It was in OK condition, but it clearly needed some updating and sprucing up. The fabric in the seats was ripped and the paint was in tough shape. So, a decision was made to restore it with funding from a small group of individuals and at no expense to the college.

Kimball helped find the right person to do the work: Amish craftsman Paul Stoltzfus, owner of Leola Coach Shop in Leola, Pa. In June 2019, Kimball and his wife, Paula, and his brother, Bill, drove the carriage in a U-Haul to Pennsylvania to leave it there for a total rejuvenation.

“Wheaton’s carriage is as much a part of the history of Norton as it is to Wheaton College. I felt we had to do everything we could possibly do to save the carriage. That is why I got involved,” Kimball said.

In July 2021, Hanno flew to Pennsylvania and rented a 28-foot U-Haul to drive the carriage back to Wheaton. He left on a Wednesday night and was back with the carriage by midnight Thursday, after driving through tropical storm Elsa and sitting in the truck for two hours amid lightning on the Major Deegan Expressway in New York City after it was shut down due to flooding.

“This carriage is like something out of Cinderella. It’s big and it’s made for journeys,” Hanno said. “When I went to get it in Pennsylvania it was so shiny I could see myself in it. The fabric is all new and all of the details are back on it.”

The renewed ride now is safely stored at Wheaton to be brought out for special occasions. Guests at an October Board of Trustees dinner got a chance to admire it in the glow of evening lights.

Since it provides a glimpse into past lives and allows the examination of artisanry of the time, it can also be used as a teaching tool for students, Boylan said.

“I am fascinated by Mrs. Wheaton herself and the legacy that she has left. The more I learn about her and read about her—what an incredible, unique woman she was, how independent she was, especially for the 1800s—the more intrigued I am,” he said. 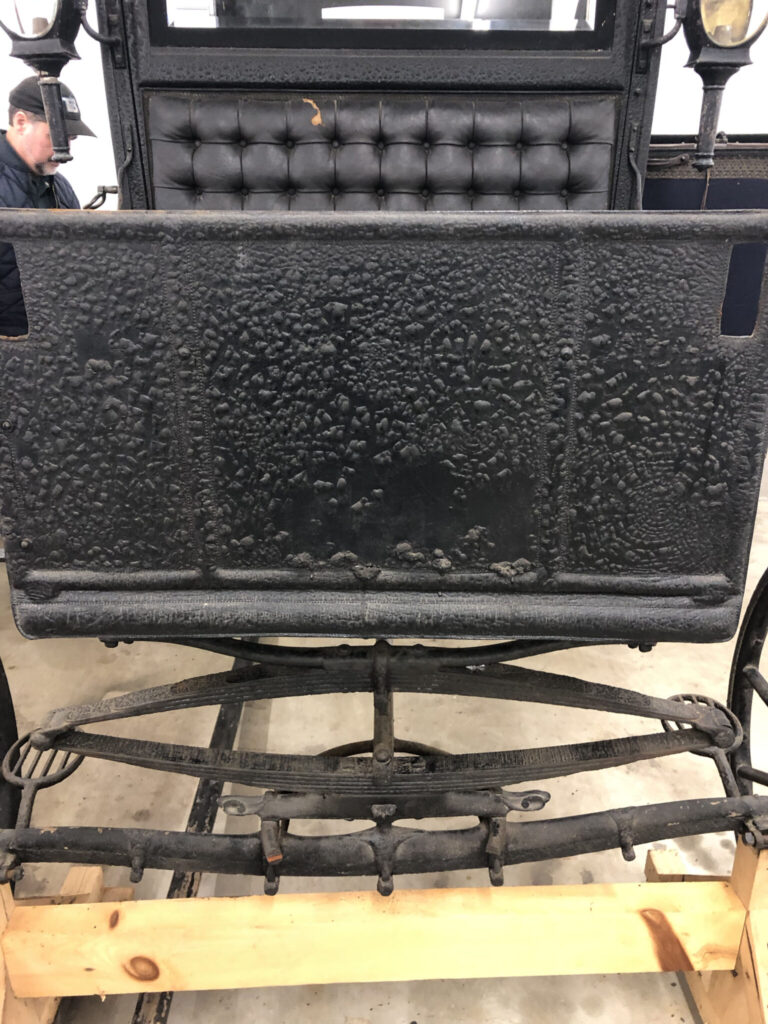 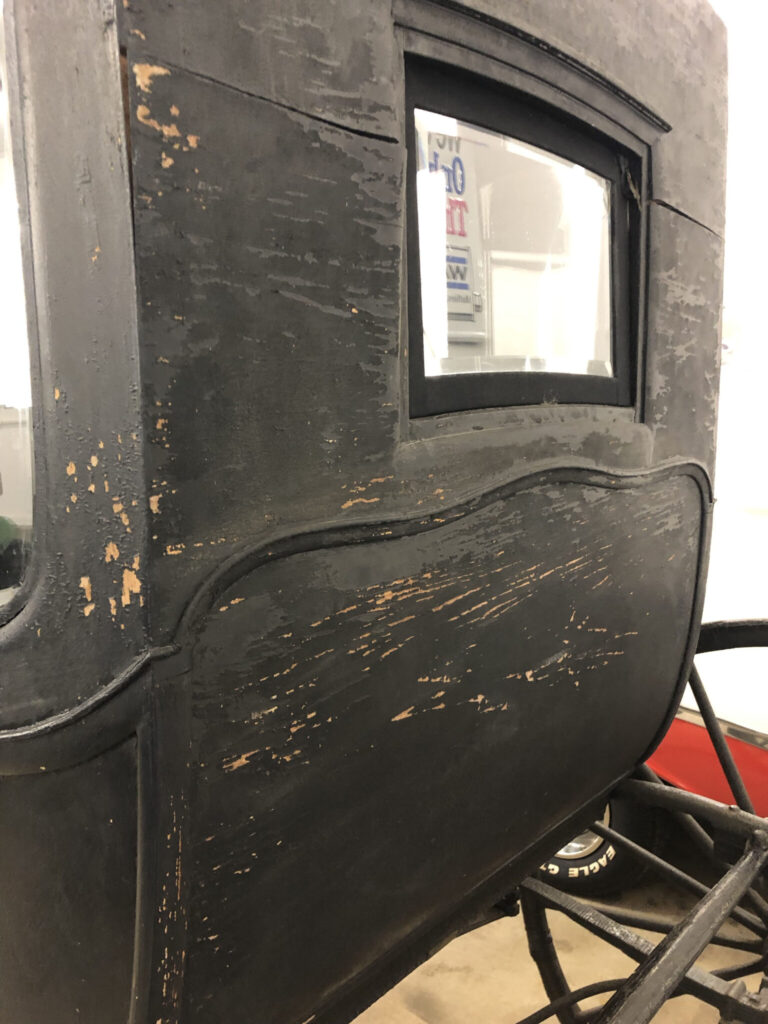 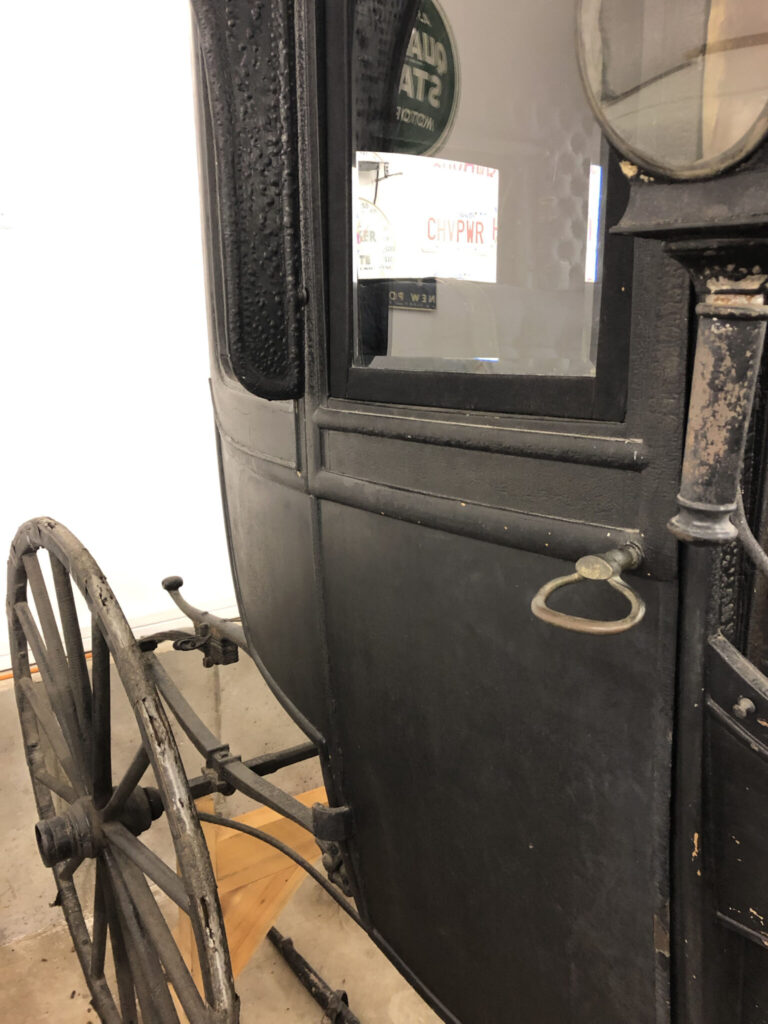 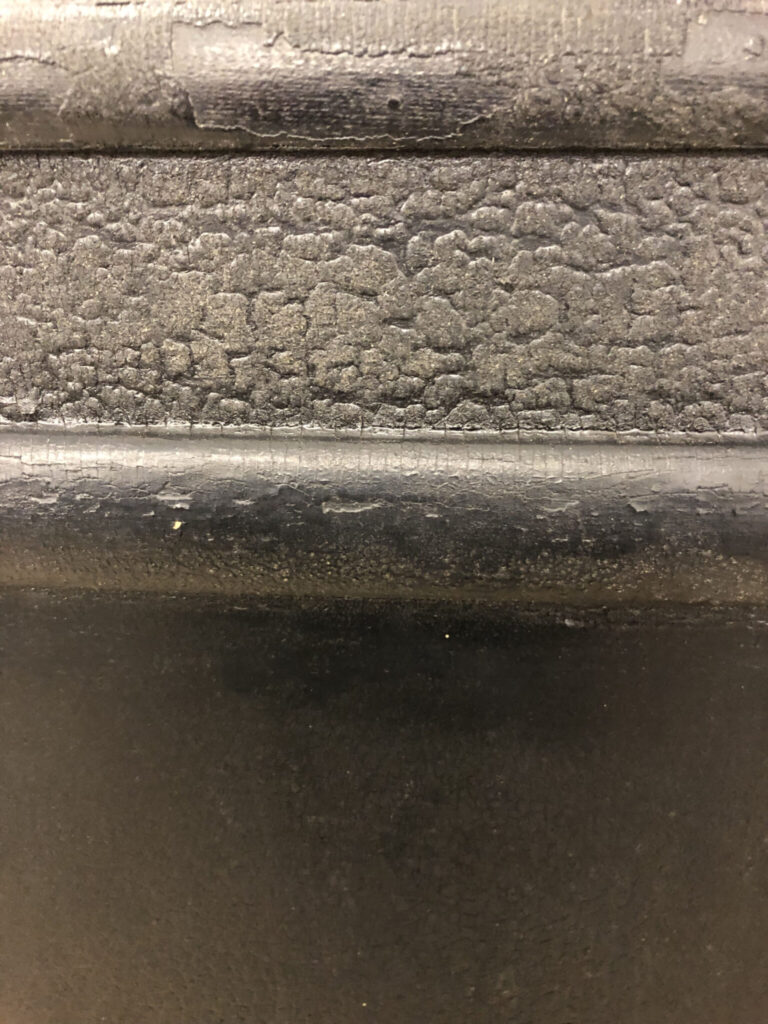 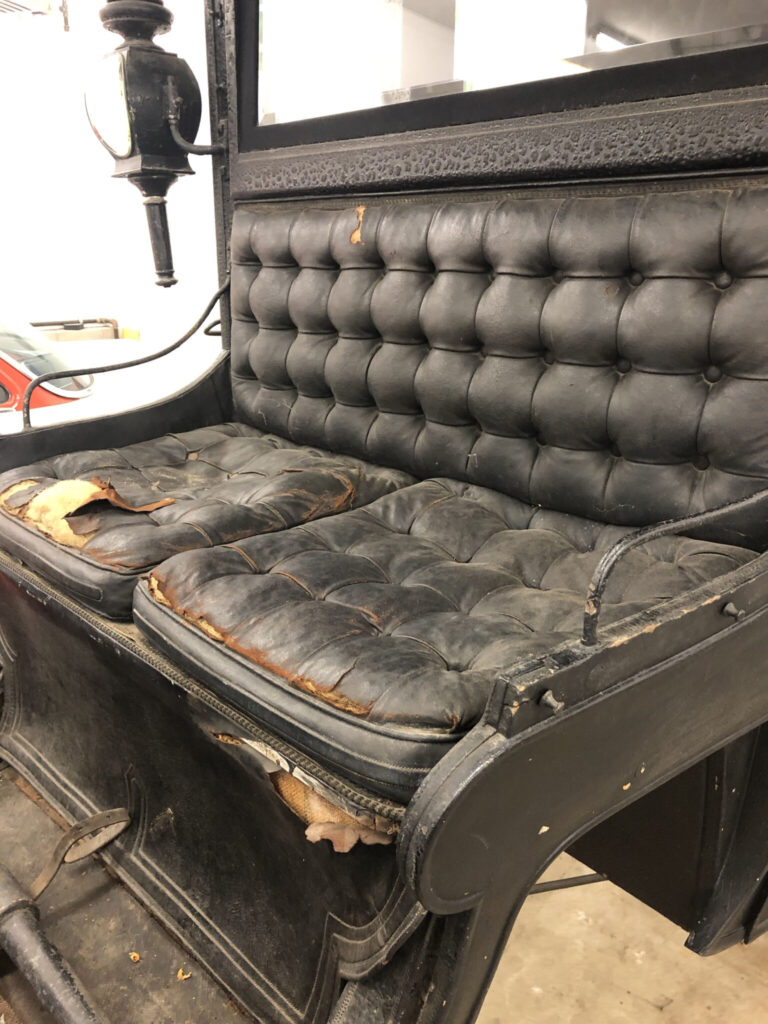 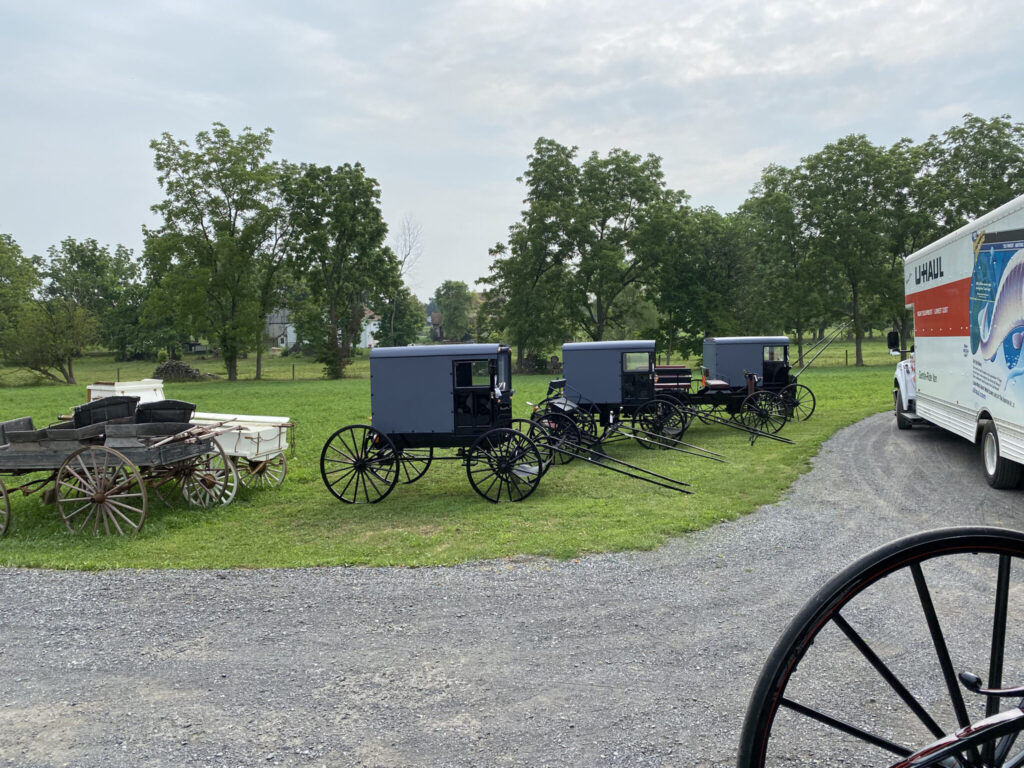 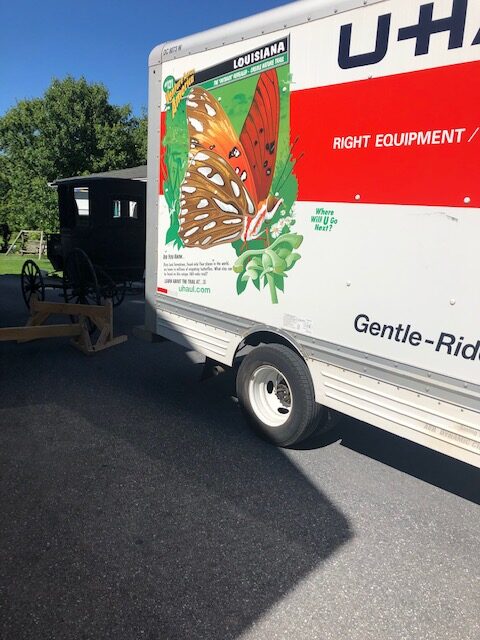 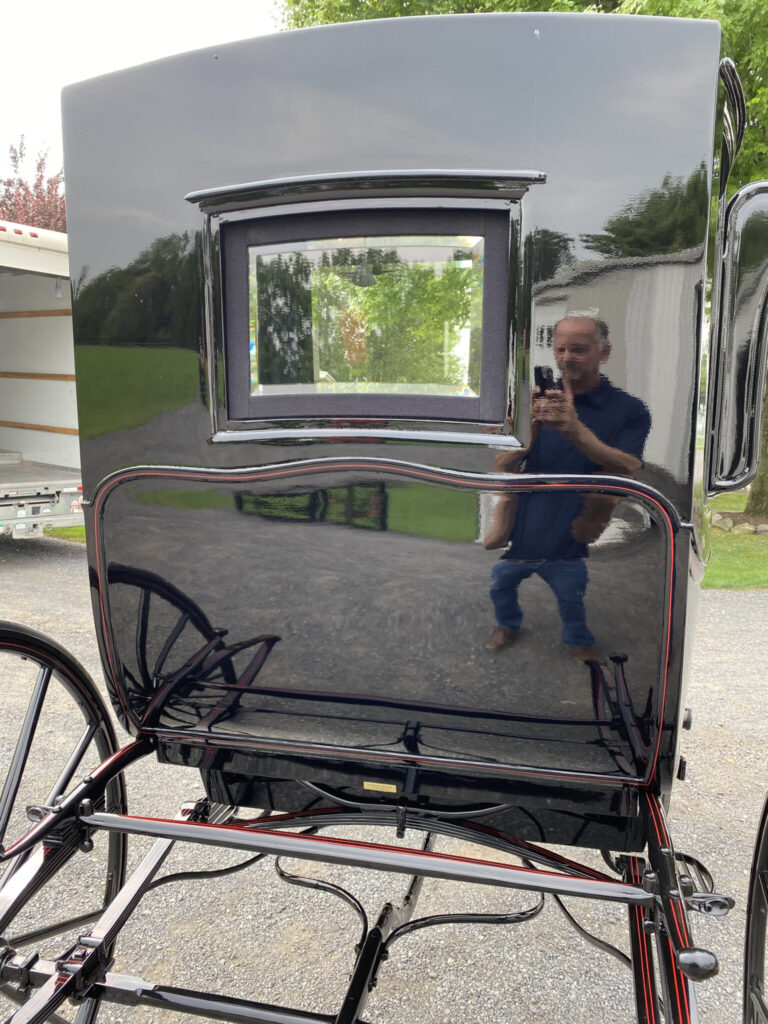 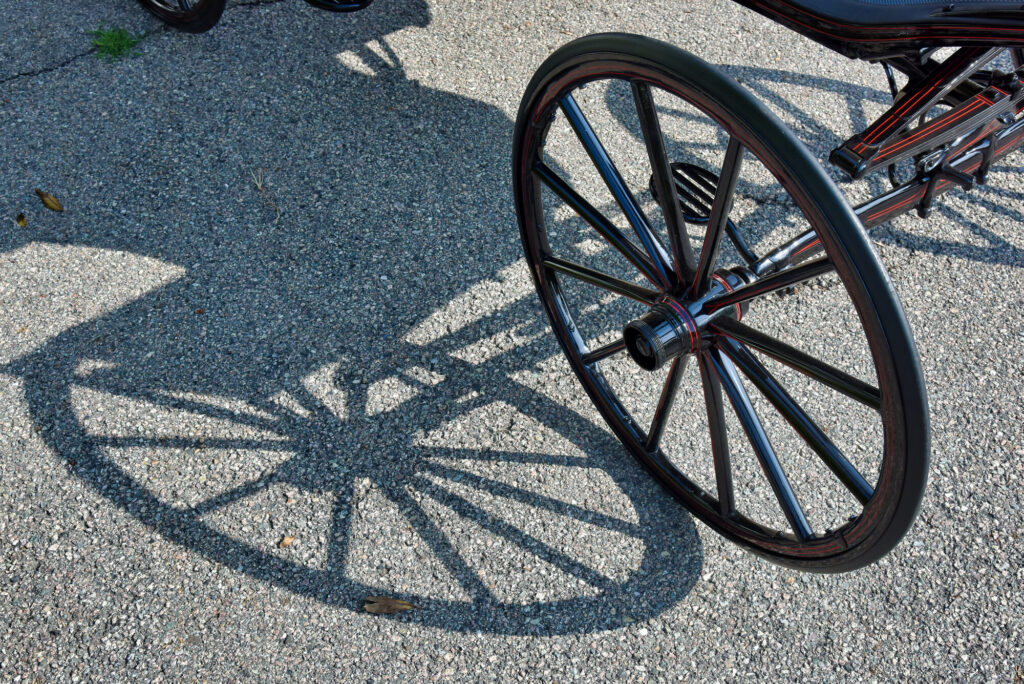 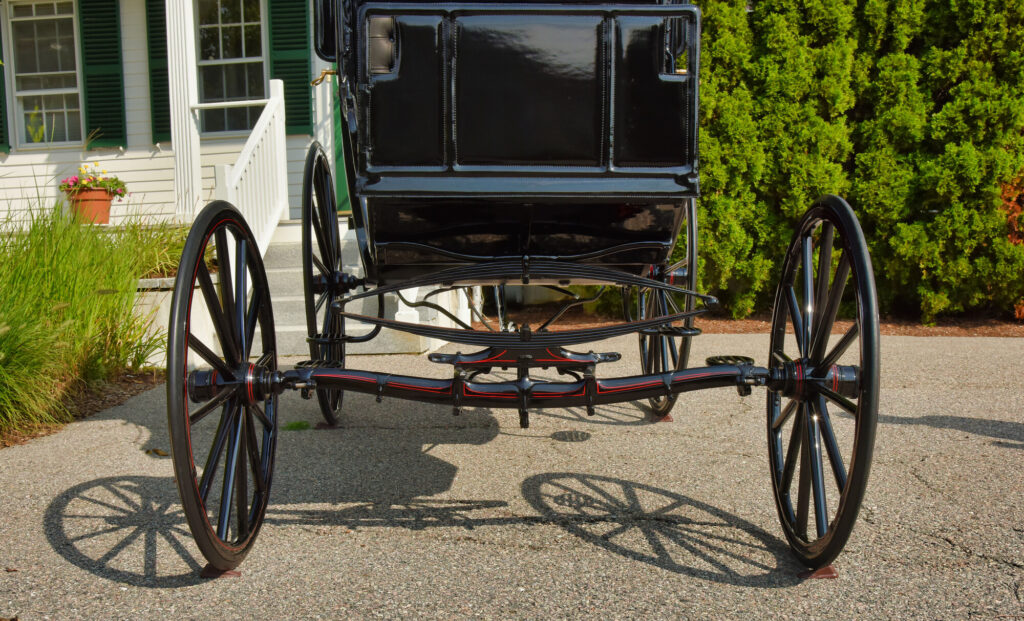 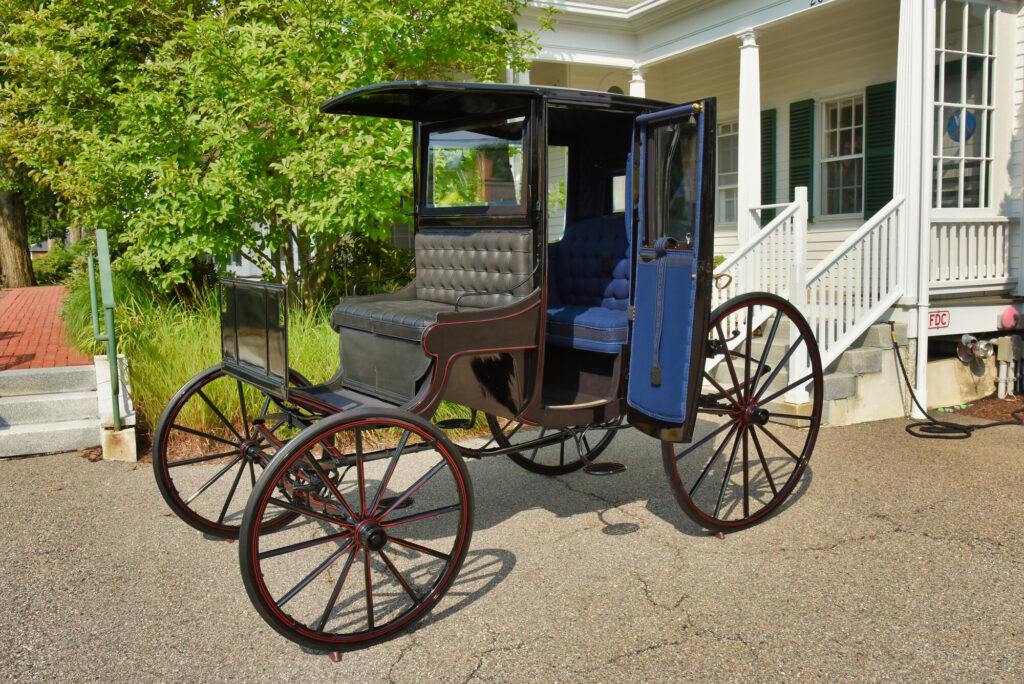 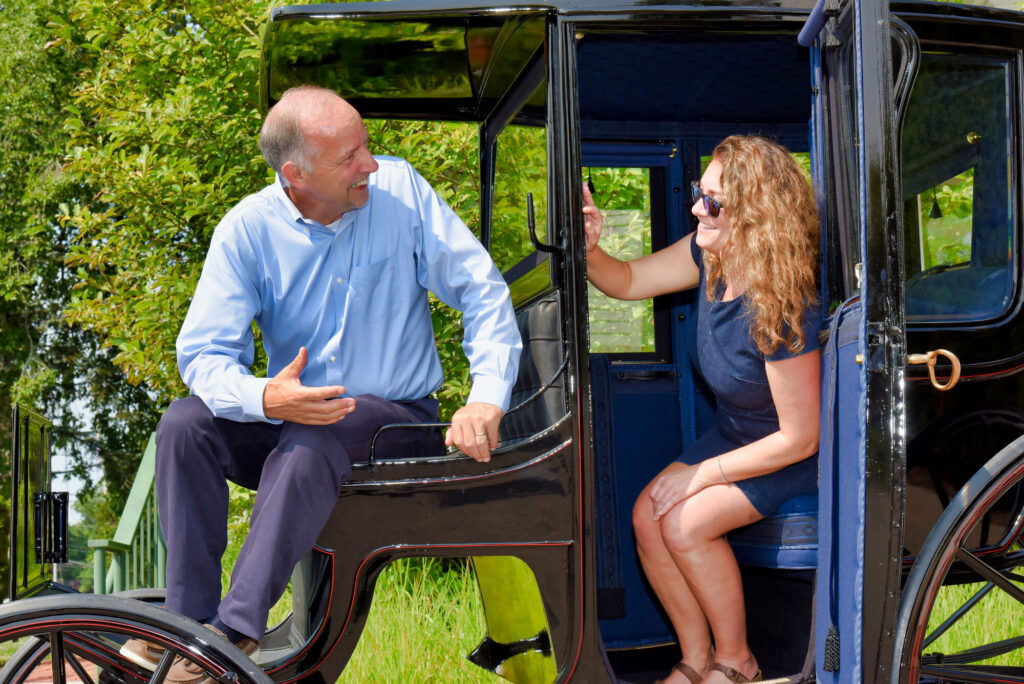 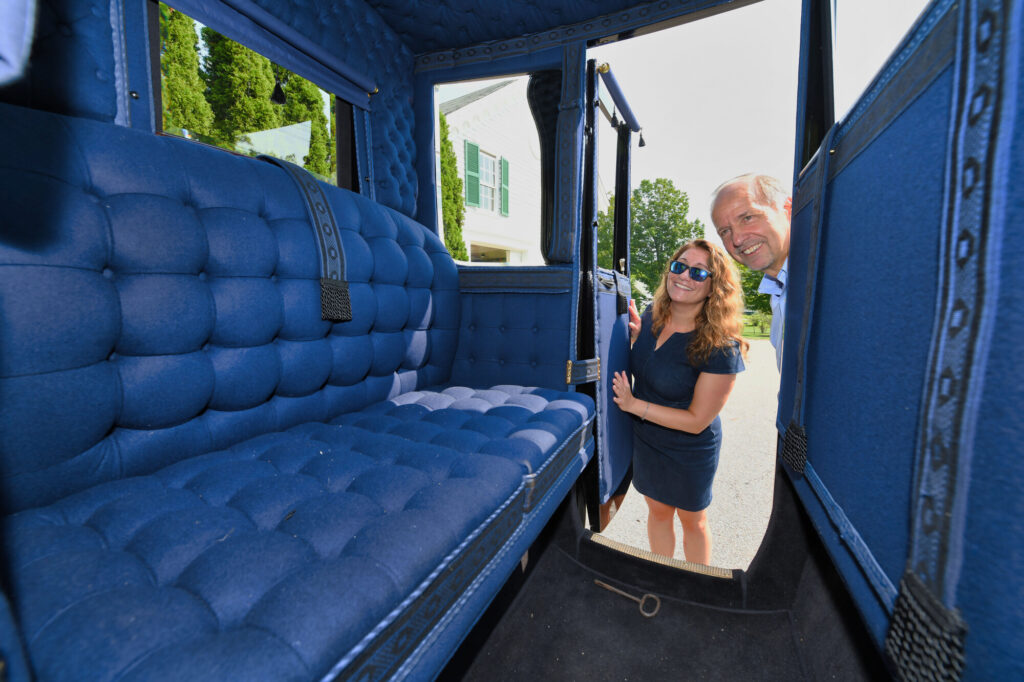 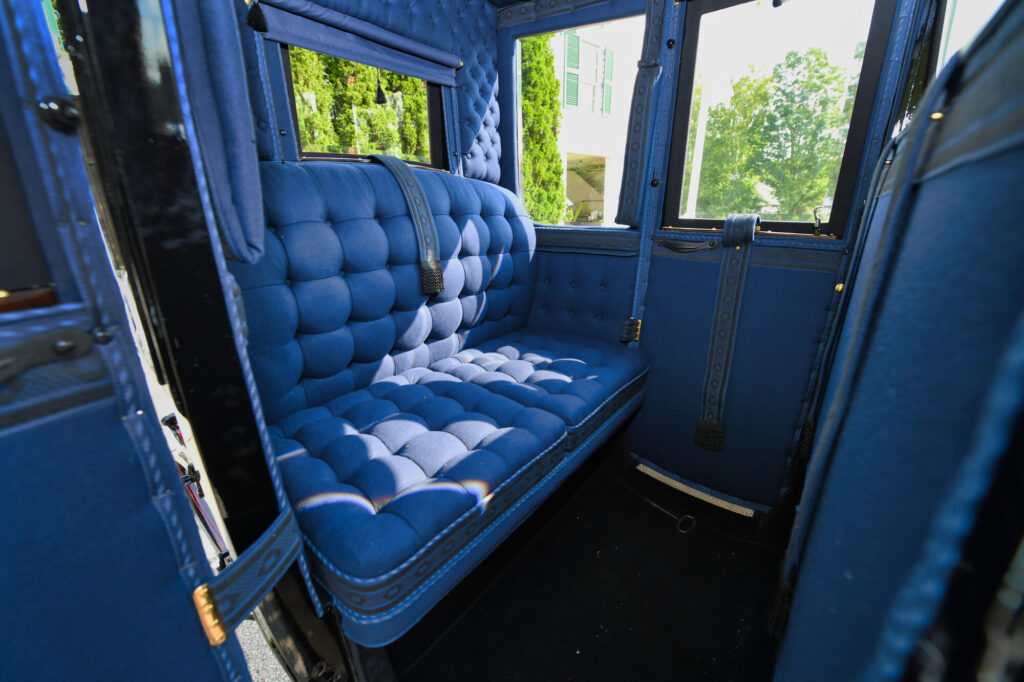 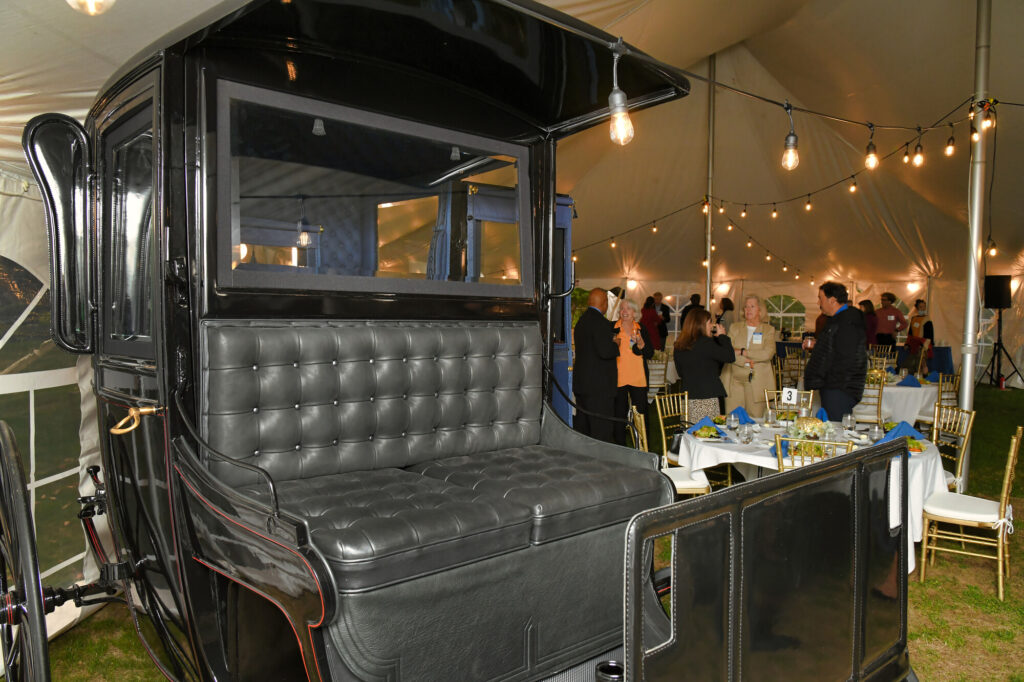 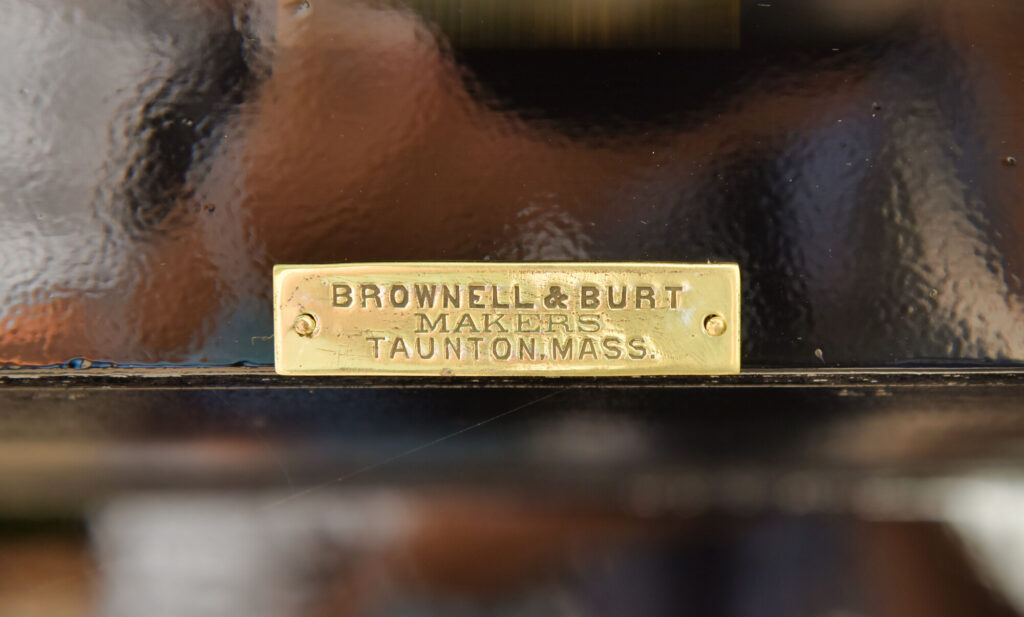