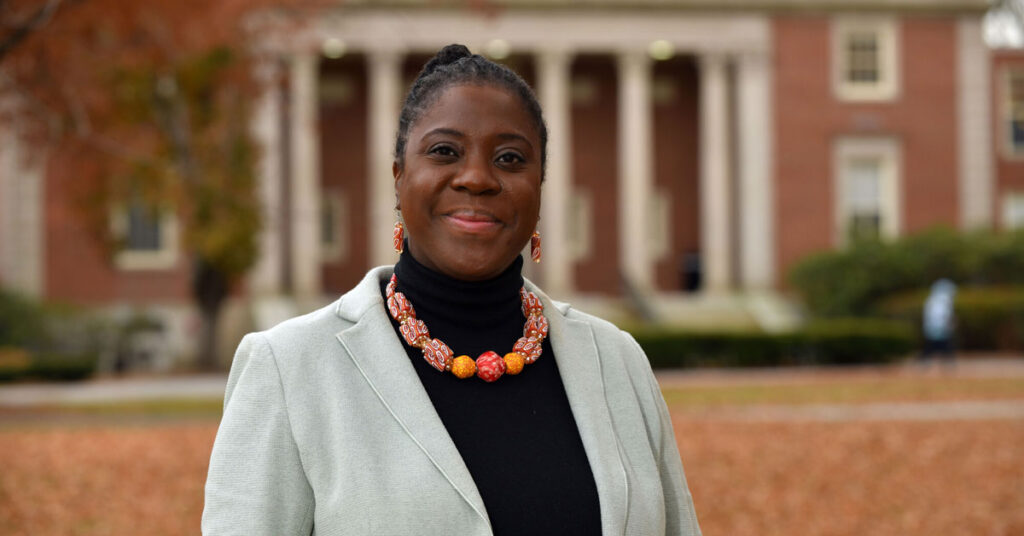 During the fall semester, the Office for Institutional Equity and Belonging, and the Diversity, Equity and Access Leadership team sponsored “Understanding Race, Racialization and Systemic Oppression in Higher Education.” The virtual panel discussion featured experts exploring the ways in which racism manifests itself on college campuses and what members of the Wheaton community can do to help Wheaton be an anti-racist institution. As a follow up, we focus on what it means to be “anti-racist” in concluding our three-part conversation series with Shaya Gregory Poku, associate vice president for institutional equity and belonging. Read parts one and two.

How do you define anti-racism?

“Anti-racism is the pursuit of racial justice and the upending of inequality.”

Can you help us distinguish between anti-racism and “not racist?”

“‘Not racist’” focuses on an individual desire to respect all of humanity. This approach is noble, but it does not track with how racial harm works. Individual prejudice, or the lack thereof, will not stop racism. To be anti-racist is to understand that it is not enough to be a kind or well-intended person. One must do the work to address the massive structural disparities we face today in wealth, health outcomes, policing and educational attainment due to generations of discriminatory practices.

Anti-racists pay attention to the power dynamics. They are committed to helping create systems of accountability to address racial inequality and pursue racial reconciliation. This could look like being conscious of where you shop; paying closer attention to who is being promoted at work and how that aligns [or not] with the criteria outlined in your organization; talking to the PTA and school board about the representation in books being used in the schools; working with the local library to research and raise awareness of local incidents of racial injustice in your area; advocating for greenspaces across neighborhoods; investigating current legislation about voting rights in your state; and more.”

“Let’s be very clear that people have been historically excluded from higher education by policy and by custom, and Wheaton is not an exception nor exempted from racism, as uncomfortable as it may make people to hear it. Ultimately, Wheaton is enmeshed in systems and structures that maintain a racist status quo. Thus, anti-racism at Wheaton is about addressing systemic inequality within the institution that has hurt alumni of color and continues to harm current staff, faculty and students.

“To understand what I mean, it is valuable to look at Wheaton’s own history of being founded partly in response to sexism. Few women had access to higher education in the 1800s because there were not many slots available. Most colleges didn’t admit women and the cultural norms buttressed this dearth of opportunity because the prevailing idea was that women were intellectually inferior and needed to focus solely on the domestic sphere. Judge Laban Wheaton undoubtedly made his decision in the midst of opposition from neighbors who may have found his decision to establish a women’s seminary incredulous.

“So, while Judge Laban Wheaton’s decision was certainly countercultural, it did not eradicate the sexism and misogyny Wheaton students faced in the world around them before, during and after Commencement. Similarly, institutionally, the net result of anti-racism is about being clear about what Wheaton is doing to counter the racial injustice that suppresses and undervalues the lives of people of color at Wheaton and beyond.”

Is there a generational gap in how the term ‘anti-racism’ is viewed?

“Language always evolves, but themes do not. There have always been themes of anti-racism in the long arc for racial justice, but the term itself may be new to some. It is worth noting that in 1945, Wheaton College students raised funds for scholarships to help to diversify the student body. This was an anti-racist act for sure, even if that is not how it was described at the time.”

Why is anti-racism a challenging concept to grasp?

“I think that we have trouble understanding anti-racism because we fail to understand racism itself. Racism and colorism permeate policy, culture, religions and institutions, and it has for centuries by design.”

“The lack of understanding grows as we get distracted by an extremely narrow and oversimplified story of racism. When media coverage about racism focuses on an individual person wielding epithets or other visible acts of racialized hatred, of course, people want to distance themselves from this depraved behavior. So, we hear the common refrain of ‘I am not racist.’ This narrow understanding of racism overlooks how racism actually operates, systemically. The more we focus on what one individual did when they used an epithet, the more we obfuscate the true impact of racism in our world.”

What should we focus on to have a true understanding, then?

“We need to look at the core of anti-racism, which calls for addressing disparate impact and flawed [incomplete] narratives. Here are two examples. The principles of democracy came from the ideals of the Haudenosaunee, often called the Iroquois, and not just from Enlightenment thinkers. Indigenous influence is rarely discussed. Similarly, yes, the United States banded together in World War II, when women worked in the factories and planted Victory Gardens, but it is also important to note the significance of the contributions of Mexican laborers who sustained our agricultural systems through the Bracero Program. Complete narratives are important for getting a clear picture of our common humanity and honoring the contributions [and resistance] of communities of color. Addressing the duality between what is needed to achieve full human rights, and the lapses that create barriers today and in the past, is at the heart of what it means to be anti-racist.”