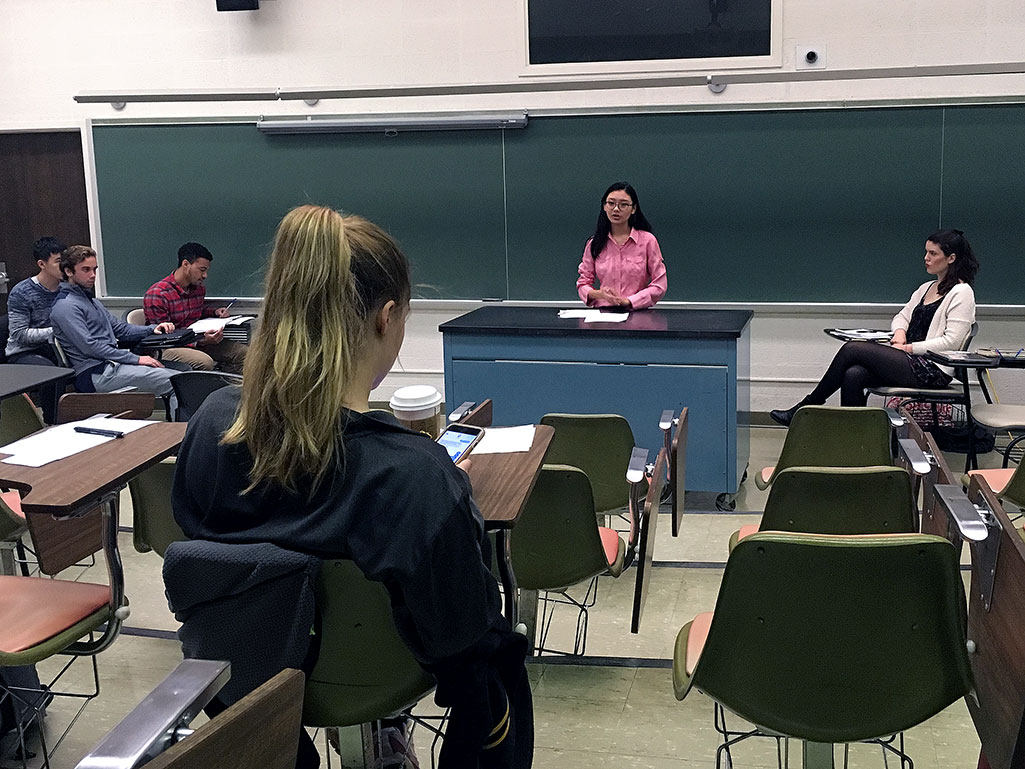 Students in “Business and Management Responsibility” last week had the opportunity to debate one of three issues appearing on the Massachusetts ballot—a happy coincidence in a course that encourages students to research both sides of an issue to strengthen their arguments (and, coincidentally, become better voters).

Both the course and its textbook, Good Corporation, Bad Corporation: Corporate Social Responsibility in the Global Economy, by Elizabeth Pulos and Guillermo C. Jimenez, are structured to have students explore two sides of a debatable proposition—for example, “Should there be limits on corporate campaign spending?” On Mondays and Wednesdays, the class grapples with that question, and then on Friday two small groups have a formal debate on the issue, each randomly assigned the pro or con, personal feelings aside.

The debate is timed, with opening arguments, opportunities to ask questions, and time for rebuttals and summaries. Professor Speights and other students evaluate the strength of both arguments and determine a debate “winner.”

“The class is intended to help students learn about the complexities and nuance of debate. That’s vitally important in this particular political arena, where people are really comfortable with their sound bytes and their headlines but not actually in understanding topics fully,” Speights said. “I am in no way an expert on all of these topics that we talk about, but my role is to create a space in which the students can get exposed to multiple perspectives.”

Though corporate campaign finance, and specifically the 2010 Citizens United case, was already on the syllabus, Speights said it was by chance that the conversation happened to fall on the week of Election Day, in a moment when a related question appeared on the ballot. Massachusetts voters were asked on November 6 to decide whether to form an advisory commission to look at constitutional amendments regarding corporate personhood and political spending. (The ballot measure, Question 2, passed with about 71 percent of the vote.)

“I thought it was particularly important to get into the nitty gritty of what this case was about, to make sense of it for those who could vote on it,” Speights said. “I was intentional about unpacking the history of the decision, because it was so pertinent.”

In Friday’s debate Mira Lockwood ’20 and Kiki Marlam ’20 argued in favor of having no limitations on corporate campaign spending. Among their points was that, in today’s social media environment, citizens actually have the power to push corporations to act responsibly, making companies truly act on behalf of their customers and constituents—thus making them deserving of free speech protection. (The team won the debate, according to a class vote.)

Lockwood said that though she was hesitant about the class’s debate structure at first, she has come to appreciate what the format can teach her, as a future business owner as well as a voter.

“Preparation for the debate allows you to gain research skills and teaches you how to formulate successful arguments. In contrast, during the actual debate, the other side may argue something you did not expect or prepare for or they may ask you a question you did not see coming, so it teaches you how to always expect the unexpected,” she said.

The value of understanding both sides of an argument is one of the key lessons Speights hopes her students take from the course.

“As the semester has gone on, they’ve becoming increasingly better at the debates. They’ve learned that one way to feel comfortable and ready for your debate is to not only do the research on your side but to research the other side as well, so you can actually anticipate counter arguments,” Speights said.

Speights participated in a conversation on Monday, November 5, with WGBH reporter Callie Crossley, who was on campus as a visiting Woodrow Wilson Fellow.

“I asked her, ‘How do we help develop well-rounded perspectives,’ and she basically said, ‘You cannot sit idly by. You have to actively engage and try to gain information by looking at alternative perspectives.’ And it was really cool to see my students notice that, not only was that important, it was actually a strategy for them to make more persuasive arguments,” Speights said.