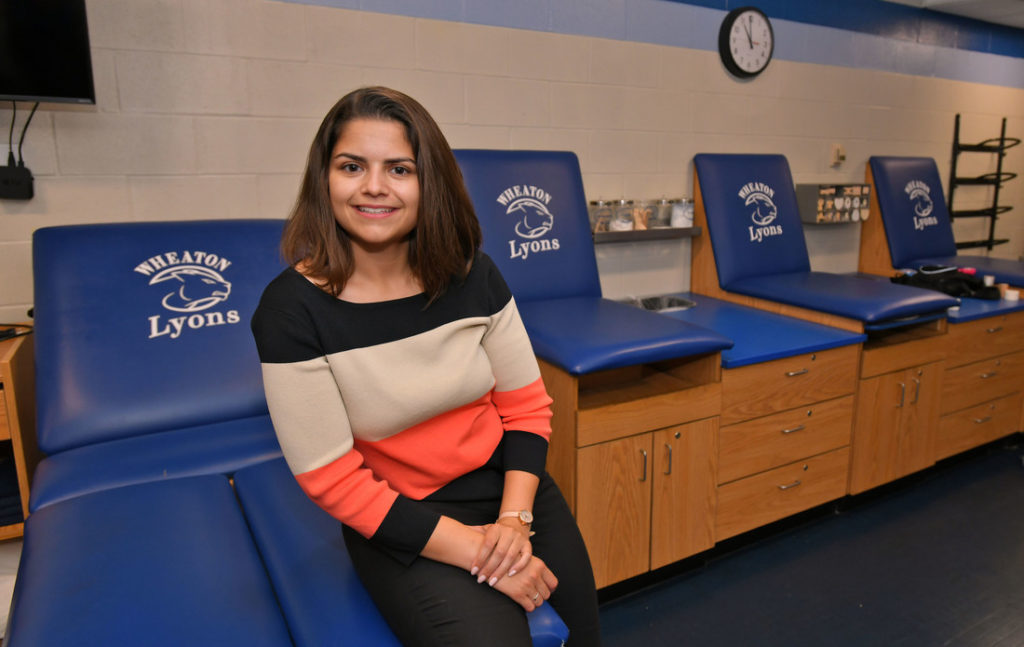 Samantha Worobey ’20 contributed to research and co-authored a paper on the protective effect of oral contraceptives against anterior cruciate ligament (ACL) tears in teenage female athletes.

The research was published in March and now is part of the database of the United States National Library of Medicine at the National Institutes of Health.

In summer 2018, Worobey interned at the Brown University Sports Injury Laboratory and researched and wrote much of the background material for the published paper titled “Oral contraceptives provide protection against anterior cruciate ligament tears: a national database study of 165,748 female patients.”

She is one of six authors on the paper, along with the research leads and her internship mentors at Brown, Dr. Brett Owens, professor of orthopedics, and Dr. Steven Defroda, a resident in orthopedic surgery. According to the article abstract, “Anterior cruciate ligament (ACL) tears are more prevalent in females than males. One of the factors responsible for this may be the variation in levels of estrogen and progesterone. The purpose of this study was to determine the potentially protective effects of oral contraceptive pills (OCPs) on ACL tears.”

The study concludes that oral contraceptives protect against ACL tears with a 63 percent reduction rate, particularly among those who are 15 to 19 years old, and urges consideration to prescribing the pills to young athletes, after assessing any risks.

Worobey, a neuroscience major who was a member of the Wheaton lacrosse team her freshman and sophomore year and now is a team manager, was drawn to the work because it combines her interest in sports and medicine as well as a desire to advocate for equitable research that can help women.

“The project works toward eliminating the gender gap in medical research, and it is the kind of research that intrigues me most, investigating two seemingly unconnected things—birth control and ligament stability—which could have real implications in the word of athletes,” she said. “There is much in the news about inequality in things such as pay and job stratification, but the inequality is just as great in medical research, but isn’t widely discussed.”

Worobey noted that her internship at University Orthopedics and the Brown University Sports Injury Lab helped build her confidence as a researcher and solidified her interest in pursuing a career in which research plays a role.

“This was the first time that research I have done has been published. It was an amazing feeling, being able to do real work at such an early stage in my career. I am so grateful for the opportunity I had to work with Dr. Owens and in this lab because I was viewed as a part of the team just like everyone else. They respected my ideas, and I was not only allowed but encouraged to make contributions. I was trusted to play a significant role in different projects.”

Her work at Wheaton has been equally recognized. Assistant Professor of Biology Jennifer Lanni describes Worobey as a truly remarkable student.

“I had Samantha in ‘Genetics’ and then again in ‘Biochemistry.’ Both of them are lecture and lab, so we saw a lot of each other. She did such a good job that I have asked her to be my teaching assistant for ‘Biochemistry’ this fall,” Lanni said.

“Sam’s article is particularly exciting because of the impact this research will have,” Lanni continued. “According to metrics from the publisher, the article has already been mentioned in 40 different news stories. Some of them are from familiar media outlets (MSN, The Guardian, The Mirror, Runner’s World); others are from France and Scandinavia.”

The research article adds to Worobey’s growing credentials and builds upon the wealth of experiential learning opportunities in which she has engaged.

As a freshman, she volunteered at Monadnock Community Hospital back home in New Hampshire, working with the patient experience coordinator. Currently, Worobey works as a caretaker in the Wheaton College Animal Facility, is on the executive board of the American Medical Women’s Association as well as Alpha Epsilon Delta, the pre-health honor society, and is a member of TriBeta, the biology honor society.

This summer she interned at Fuller Hospital in Attleboro, Mass., as a mental health specialist, supporting staff on various psychiatric units to keep patients safe, monitor progress, organize and run groups, and to be there as someone who would listen.

“These patients are experiencing a tough time and I did the best I could to make it easier on them. I really did feel a sense of pride whenever I could make their day a bit better, or even just turn their mood around for an hour,” she said. “I had previously become confident in the fact that I want to work in research, but this experience made me aware of the fact that being active in patient care is important to me.”

There likely will be more published work from her soon, as she has been engaged in an independent project with a partner who is a student at Brown’s Warren Alpert School of Medicine.

“We are investigating trends in Achilles tendon tears in the NFL,” she said. “I am incredibly excited for this paper to hopefully be accepted soon because the two of us have put a lot of work into this study, and some of the findings have been really interesting. It will also be cool to see my name pop up a couple of times in article databases.”