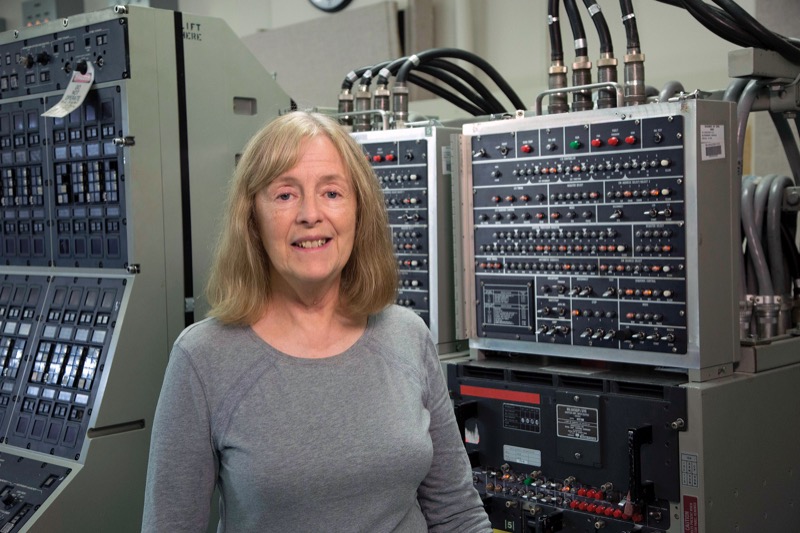 Before smartphones and computers graced the pockets and homes of the average American, Nancy Cobean Hassel ’72 helped develop one of the first supercomputers—large, powerful mainframe computers that can fill a room.

Her work did not involve just any supercomputer, but the first one in use on a submarine, said Hassel, a computer scientist at the Naval Undersea Warfare Center (NUWC) in Newport, R.I.

“The Defense Advanced Research Projects Agency provided funding to NUWC for a state-of-the art parallel processor from AT&T, and I wrote the programs that were tested at sea,” Hassel said. “These days our home computers are probably substantially faster than that supercomputer.”

Forty years later, Hassel remains at NUWC. As a software and database developer, her skills have kept pace with changes in technology.

In the late 1970s, she began programming in Fortran—one of the oldest programming languages—and transferring data on giant reeled tapes. Over the years she has developed proficiency in now-obsolete languages like Ada and Pascal as well as languages still in use, including C, Java, Visual Basic and PHP. She currently works with a team that hosts secure web applications.

“NUWC has kept up with the rapidly evolving computer technology. In addition to languages, I have also watched the evolution of operating systems and hardware technology,” she said.

As a teenager, Hassel loved math; she competed on her high school math team. At Wheaton, she majored in psychology as she found the classes intellectually stimulating, she said.

She received her master’s degree from Boston College in educational research, measurement and evaluation, and was hired as a statistician to advise in experimental design at the Food Science Labs of the Natick Army Food and Clothing Research Center (now called the U.S. Army Natick Soldier Systems Center).

Hassel maintained a big computer that was a precursor to the enormously popular 32-bit VAX. This computer had a terminal, and it was no longer necessary to program using punch cards, she said.

“I was proud to be technically able to assist the technician when he loaded an update to the operating system from the big reeled data tape. The day came when the operating system update loaded itself, and I realized that computer technology was about to get away from me unless I made a career change to become more directly involved with computers,” she said.

Hassel found that opportunity when she secured a position at NUWC—a bit by accident. An avid sailboat racer, she’d visit Newport on the weekends “while simultaneously trying to figure out a job that offered more challenging computer interactions.”

She learned about NUWC’s openings from its employees, who happened to be racing on sailboats alongside her. As a statistician, she became eligible for transfer to NUWC as a computer specialist—so she made the move.

Since her transfer, she has not looked back.

“I have thoroughly enjoyed my 39 years at NUWC,” she said. “The work has always been interesting and challenging. NUWC fosters a culture of cooperation. Differences of opinion are resolved by digging deeper into comparisons of technical detail.”

Along the way, Hassel has benefited from her Wheaton degree.

“My Wheaton education left me with a breadth of philosophical resources to fall back upon,” she said. “Over the course of my long career, there have been many moments when it has been necessary to stop and reflect upon the wisest next course of action. My liberal arts education has provided helpful resources during such moments.”

Advocating for the seafood industry