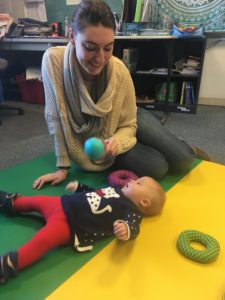 Exploring a profession: “I’m interested in doing government or nonprofit work, so this internship allowed me to explore that interest, as well as gain familiarity with specific nonprofits in Portland. I worked with two populations, children and immigrants, and observed how the nurses navigated issues like cultural differences in raising a child or breastfeeding. It was an incredible learning opportunity.”

On-the-ground learning: “The program is staffed by two nurses. I helped them coordinate the toddler and baby playgroups every week, complete administrative tasks and observe home visits and meetings with other public health departments in Maine. My main task was creating an accessible handout about Adverse Childhood Experiences (ACEs), or childhood trauma. They wanted to identify non-invasive questions that they could use during home visits to screen for ACEs, and provide parents with a basic understanding of ACEs.”

Creative solutions: “My biggest challenge was creating the ACE handout, which had to be at a sixth-grade reading level and easily translatable. We did not have a color printer, which meant that I had to make my own brochure rather than use an existing one. This was fine for explaining information, but presented a challenge in making a graphically pleasing layout. I overcame this by displaying the information using a graphic organizer, which does not require many images or color. I also learned that interpreters could be costly. Our program had a limited budget, so I reached out to my Wheaton classmates, and they graciously offered to translate the two-page handout. Lena O’Flynn ’18, Omar AL-Mogahed ’18 and Chanelle Irakoze ’18 translated the document into Spanish, Arabic and French, respectively.”

Family focus: “My favorite moments on the job occurred during the weekly playgroups. There was a large morning playgroup for young children (ages 0–5) in the morning, and a smaller baby playgroup in the afternoon. It was super fun to play with the kids, and I also got to know the mothers. The baby playgroup, especially, allowed new mothers a chance to get out of the house and socialize not only their baby but also themselves. That was one aspect of the program that I really valued: it was just as focused on the welfare of the mother as it was on the children.”

Cultural competency: “This internship connected to Wheaton courses I’ve taken—especially to my final project for senior seminar, for which I wrote a literature review on ACEs. That background helped me with my brochure project. My courses in child development, social psychology and multicultural psychology helped me better understand the patient population. Multicultural psychology, in particular, provided me with a background in cultural competency and knowledge of the cultural integration process for immigrants, which was important to my job. For instance, one new mother struggled to get enough sleep because friends frequently visited her apartment to see her baby and stayed until late at night. In her culture, it was considered rude to ask them to leave so she could sleep. The nurse and social worker talked with her to strategize other ways that she could squeeze more sleep in throughout her day. It was inspiring to see how the nurses integrated cultural competency into their practice.”

A starting point: “This internship increased my interest in nonprofit work, which guides my job search process, but I’m still open to different types of nonprofit work. I do know that I want to work with people in some way. I am considering careers in public health, social work or clinical work. I enjoyed working with both children and immigrants, so those are populations that I might want to focus on in the future. Over time I’ll gain a better sense of the type of nonprofit work that I want to do, and then return hopefully to school for a master’s degree.”