Scholars have long agreed that William Shakespeare collaborated with other authors on a few of his works, but the question of who wrote what has remained somewhat of a mystery.

Ann Marie Brasacchio ’16 and Elizabeth Peterson ’15, under the guidance of Professor of English Michael Drout, have been working to unravel that mystery using Wheaton’s Lexomics program to analyze how words and phrases are used in these plays.

Recently, the students got the chance to see Henry VIII—a rarely performed play believed to be a collaboration between Shakespeare and playwright John Fletcher—on stage at The Shakespeare Theatre of New Jersey. They talked with the cast and directors afterward to get further insight into how the play may have been crafted.

“We asked if they noticed it being any different from Shakespeare’s other plays, having worked on it. One of the actors commented that sometimes she’d noticed her character switching from calling somebody ‘you’ to ‘ye’ in the middle of a scene,” Peterson said.

That observation fit in well with the students’ Lexomics analysis, in which they were able to graph the usage of “you”—a Shakespeare preference—versus “ye”—which Fletcher favored—and match it up with other evidence to pinpoint which parts of the play likely belonged to which author.

The Shakespeare project got its start about two years ago when Brasacchio and Helen Meng ’15 both approached Drout about applying the Lexomics system to Shakespeare. Drout is a medievalist, not a Shakespeare scholar, but he agreed to support their work.

During the summer of 2013, the students worked with Drout to break apart Shakespeare plays using Lexos—the Web-based text analysis tool built by Wheaton students and faculty—in an attempt to diagram and confirm which pieces were written by which author.

Brasacchio, a chemistry major, brought a scientific approach to the process that Drout found useful.

The next year, Peterson—a double major in math and English—got involved. She spent the summer of 2014 working on the new methods developed by Brasacchio and Meng to delve even further into The Two Noble Kinsmen.

“Our research helps to confirm that Fletcher and Shakespeare collaborated on the play,” Peterson said. “People have proposed a lot of different results, but there hasn’t been a definite answer. We’re gathering a lot of evidence to create a really strong hypothesis that they probably collaborated and this is probably how they merged together.” 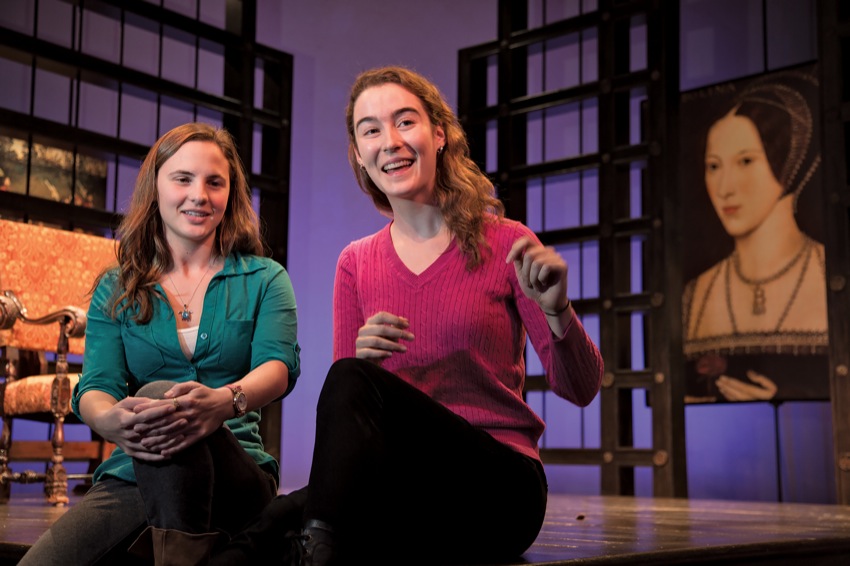 “Elizabeth went through and picked up all the linguistic things that other people had noticed but used our program to track it in a more systematic and logical way,” Drout said.

As a group, they are hoping to submit an article about their findings to a journal that highlights scholarly work on Shakespeare. Meanwhile, Peterson is using what she’s learned to write her senior thesis paper.

“I’m doing my thesis on different ideas about collaboration and how to look at things that were collaboration in the Renaissance period from a modern perspective. That includes looking at how we perceive work differently if it was written by multiple people,” she said. “One way I’m exploring this is through the Lexomics program and another way is looking at how modern performance and the way people interact with these texts is different if they are believed to be collaborations.”

“Shakespeare is considered by many to be a genius, so when he collaborates with someone that work is often considered to be watered down or weakened. And Elizabeth’s argument is that that’s not so,” Drout said.

It’s an argument further supported by the students’ experience at the New Jersey theater. When questioned, the cast said Henry VIII felt cohesive, as if the two authors had collaborated closely.

“The two plays we’ve been looking at, Henry VIII and The Two Noble Kinsmen, are constantly ranked at the bottom of the list of Shakespeare plays, but that wasn’t our experience at all watching the play,” Peterson said.

For the students, scenes in Henry VIII that are commonly attributed to Fletcher were just as enjoyable as those thought to be written by Shakespeare.

“There was one monologue that was supposedly written by Fletcher, but we thought it was one of the best parts in the entire play,” Brasacchio said.

Drout said he continues to be impressed by the initiative his students take to tackle big, complicated questions like the Shakespeare collaborations. Another student is now applying Lexomics techniques to classical Chinese texts.

“One of the best moments as a teacher is when the student has developed enough confidence about the material to tell you you’re wrong. Both of these two have done that a fair bit,” Drout said. “This is what keeps things fresh and exciting from a faculty perspective. You have fresh minds looking at texts in new ways. One of the great benefits of Lexomics for me is it lets me look at things in a different way that I would not have found just by teaching it.”