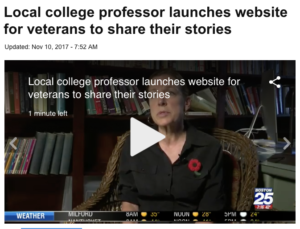 Taking note of Veterans Day, Boston 25 News featured Professor of History Anni Cecil and her new crowdsourced website called Military Life Memories, which shares stories about the daily lives of those who serve in the military, their families and civilians connected to service.

News anchor Gene Lavanchy noted that since the phase-out of the draft in 1973 “less than one percent of today’s population is in the service, meaning that the gap between civilian and military life has gotten pretty wide.”

Cecil’s work seeks to change that. “What we’re trying to do is just get a big collection of people’s memories,” the professor said during an interview recorded in her office. “It can be short little anecdotes; it can be longer life histories…Some historians have expressed concern over the growing distance between military society and the civilian world and the sort of lack of understanding and the potential implications for that.”

The professor’s research and publications have examined several facets of the history of military communities, including changes in host military base relations overseas, the historical development of military benefits, and lifestyle services.

Her new website eventually will serve as the basis of one of Cecil’s history courses. Read more about the development of the website in Wheaton Magazine.