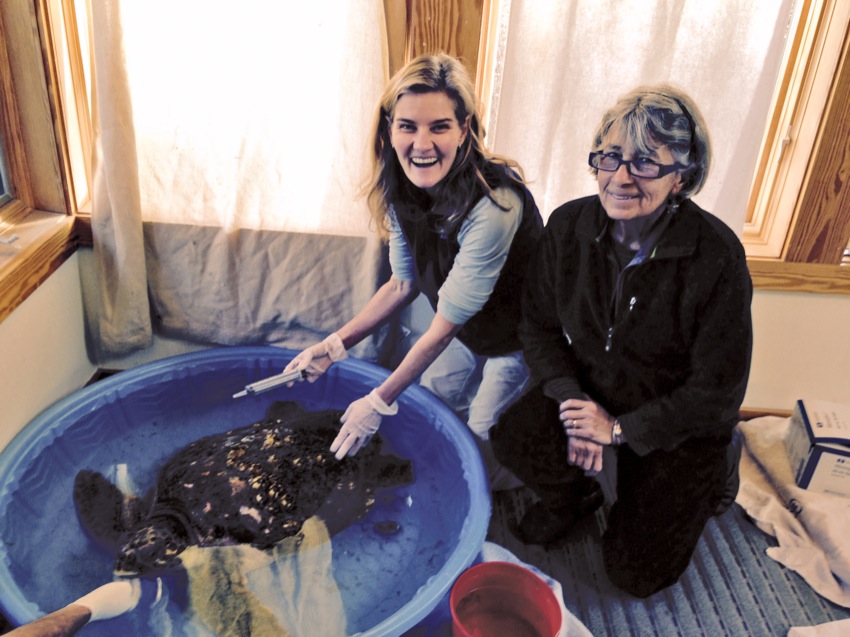 In mid-November, when the ocean temperature in Massachusetts dropped and cold-stunned sea turtles began to wash up on Cape Cod Bay’s beaches, veterinarian Leslie Boerner Neville ’87 jumped into action to help save them.

Volunteering with the turtle rescue team of Massachusetts Audubon’s Wellfleet Bay Wildlife Sanctuary, she shared her expertise and lent a hand, as did her undergraduate advisor, Wheaton College Professor Emerita of Biology Barbara Brennessel.

The stranding is not a new occurrence, but this time it was more dramatic in scope than in previous years, making the rescue effort more challenging.

“In past years, 20 turtles washing ashore in a day was a lot,” says Neville. “This time during the peak days, which began the week before Thanksgiving, they were coming by the hundreds. Initially it was overwhelming to see so many turtles coming in, and I had to rely on my past experiences to help decide which animals had the best chance of surviving.”

Neville has worked with the New England Aquarium since graduating from Wheaton, first as a volunteer, as an intern and then as a part-time veterinarian. She has been helping to care for cold-stunned turtles since 2001, at the aquarium’s Animal Care Center in Quincy, Mass.

These sea turtles nest in tropical waters—most come from the Caribbean and the Gulf of Mexico—but swim northward as far as New England to feed during the warm summer months. They often get stuck in the “hook” of Cape Cod on their journey back to warmer waters. Stunned by the cold, they stop swimming, float and are washed ashore. Staff and volunteers for Wellfleet Bay Wildlife Sanctuary organize beach walks to scout for turtles and send them to the aquarium’s rescue center.

“What a thrill to watch Leslie in action as she directed staff, volunteers and wildlife rehabilitators in caring for the animals,” says Brennessel. “It was a real emergency situation and Leslie handled it admirably.”

Neville, who majored in biology at Wheaton, enjoyed studio art classes and earned a minor in art history. Loving to work with her hands adds to her enjoyment of medicine, an interest that stems partly from her experience as a health advocate while in college, where she ran programs and met with classmates to help them manage personal health concerns.

“I learned the importance of being available, listening and trying to help others when they were experiencing a difficult situation,” she says. “The techniques that I learned through my experience as a health advocate were critical to my success as a veterinarian. At work I diagnose and treat animals, but a very important part of the process is being able to interact with people when they are in a stressful situation and knowing how to ask the right questions.”

Currently, Neville, who earned her veterinary degree from Tufts University in 1993, works part time at a veterinary clinic near her home in Harvard, Mass.