A newly accessible trail through the Pratt Farm Conservation and Recreation Area in Middleborough, Mass., is about a quarter-mile in and back. But for people with disabilities, it goes a long way toward opening up green spaces previously inaccessible to them.

Just last fall, the trail was half its size, rocky and riddled with roots. Now, the widened and flattened trail opens up access to the 160-acre park composed of wetlands, woodlands, open fields and a pond teeming with ducks. A dozen signs along the trail, in Braille and English, feature relief sculptures of native plant life so people can feel their shape as well as read about them.

“It’s just a little piece of land—but now something that wasn’t accessible before is open to everyone,” said Diane Stewart ’06 as she walked the trail on an unseasonably warm January afternoon.

The alumna, a resident and attorney who practices family and estate law in Middleborough, is the mastermind behind the multiyear effort. It began with a state grant and involved the combined support of companies and individuals—including Wheaton alumni Lisa Shure Benson ’06 and Kayla Malouin Fletcher ’10.

A little help from her friends

Stewart knows firsthand the barriers people who use wheelchairs face, especially if they love the outdoors. She often is challenged with finding accessible paths to take her younger brother, who has cerebral palsy and uses a wheelchair.

“A lot of people are unaware of these issues just because they are not used to it,” said Stewart, who received majored in Russian at Wheaton and earned a law degree from Roger Williams University School of Law in Bristol, R.I.

The alumna, an avid volunteer who serves on the town’s Board of Selectmen, Conservation Commission and Commission on Disability, decided to do something about it.

With assistance from the town’s conservation agent, Patricia Cassady, Stewart applied for a grant from the Massachusetts Department of Conservation and Recreation that successfully raised $26,515 to make a portion of the existing trail at Pratt Farm handicapped accessible. Pratt Farm, which is managed by the town’s Conservation Commission, is a popular piece of conservation land for town locals.

The grant required the town to match 20 percent of the costs with its own funds or in-kind services, which would include donations of materials for the trail, volunteer hours and the donation of services, according to Stewart.

That is where Lisa Shure Benson ’06 and Kayla Malouin Fletcher ’10 fit in.

For the Braille signs, Stewart looked for help from her Wheaton friend, Benson, who works at Skylight Studios, a sculpture studio in Woburn, Mass. (Benson’s parents, Robert and Kathleen Shure, own Skylight and its sister company, the Caproni Collection.)

Benson, a studio art major who received a master’s degree in sculpture at the New York Academy of Art, said she met Stewart when they were both first-year Wheaton students living in Young residence hall. Fast friends, they roomed together for the majority of their time at Wheaton; Stewart served as a bridesmaid in Benson’s wedding.

When Stewart asked Benson, a sculptor and conservator-restorer, for a quote for the sign project, her friend was eager to help and donate a portion of the services. Fletcher, who works at the studio as a curator and project/research manager, also joined the effort.

Benson said the project touched her personally, as her father used to be legally blind.

“I love the idea of an accessible trail, and it being one that tries to accommodate those who are blind. I’ve always admired Diane’s commitment to accessibility and people with physical challenges, and that she always works to make the world a better place,” she said.

A desire to give back was awakened in Stewart when she was a senior at Wheaton.

She participated in an alternative spring break trip with the Wheaton club Christian Fellowship to Providence, R.I., where she learned about the impactful work of nonprofits.

“It compelled me to go to law school so I could help people,” she said.

As a law student, Stewart worked with Rhode Island Legal Services, and following graduation she served as an AmeriCorps volunteer attorney for two years at the New Center for Legal Advocacy in New Bedford, Mass., which provides civil legal assistance to low-income residents of Southeastern Massachusetts.

Her volunteer ethic shines through in her professional life as an attorney. Stewart and her law partner, Michael Dube, were awarded the Pro Bono Publico Award from the Bristol County Bar Association in 2016 for their dedication to providing legal services to low-income families through South Coastal Counties Legal Services. Additionally, she manages a court-connected conciliation program for which she coordinates the pro bono efforts of 100 volunteer attorneys.

Stewart’s ability to follow through on projects and her skill at collaboration enabled her to make the accessible trail a reality—even though it was many years in the making.

She helped shepherd the Pratt Farm accessible trail plans through the regulatory process, which included a lengthy archaeology review required by the Massachusetts Historical Commission. As a result, they had to slightly change the trajectory of the proposed trail from the original plans and not pave it due to the archaeological sensitivity of the area.

Stewart’s calling to give back will now make a lasting impact on so many people who face barriers to access. The project is one that will endure for years, and touch many people.

“It’s a great feeling to work on something bigger than ourselves,” Benson said. “We can connect with people we’ll never meet, beyond our lives.”

On that January afternoon during the interview, Stewart reflected on all of the individuals who have contributed to the project.

As the weather improves, she said an ADA-compliant picnic table will be added at the end of the trail. Also, volunteers will do some additional cleanup and remove the fences that were installed for erosion control, so it’s ready for springtime visitors.

Looking around at the progress, Stewart said, “Honestly, I wasn’t sure if it was ever going to happen. But I feel it all came together really quickly once it got started. I can’t wait to take my brother.”

About 53 miles away from Pratt Farm, Lisa Shure Benson ’06 and Kayla Malouin Fletcher ’10 collaborated with Diane Stewart ’06 to make the new accessible trail enjoyable for those with visual impairments.

Working in a sculpture studio in Woburn, Mass., Benson and Fletcher designed plaques that include 3D images as well as scientific, common and Braille names for native plants at Pratt Farm.

Benson sculpted the plants in clay. Skylight Studios cast them in resin, combined the resins with the polymers that had been made from Fletcher’s digital designs and created a mold with everything as one unit. Benson then worked with a bronze foundry to create the final product.

It was the first time either alum had worked with Braille. At first, the women acquired translation services but then worked with the Perkins School for the Blind in Watertown, Mass., to ensure the translation was correct. They both ended up learning how to read Braille as an additional assurance.

“We wanted to be sure that everything would be correct for the people relying on it,” said Fletcher.

Another challenge was readability. The Braille dots had to be at a certain height, and the English letters had to be large enough to read and for bronze casting. Moreover, the signs needed to be at just the right height.

“We didn’t want signs to be so high that someone in a wheelchair couldn’t look at them. At the same time, they had to be low enough that a blind person could touch the plaque and feel the shape of the plant,” Benson said.

She found it particularly fun partnering with her close friend, Stewart, on the project.

“It’s great to work with Diane, but it was hard not to be silly at times. I would call her about something with business, and the next minute we’d erupt in schoolgirl giggles,” she said. 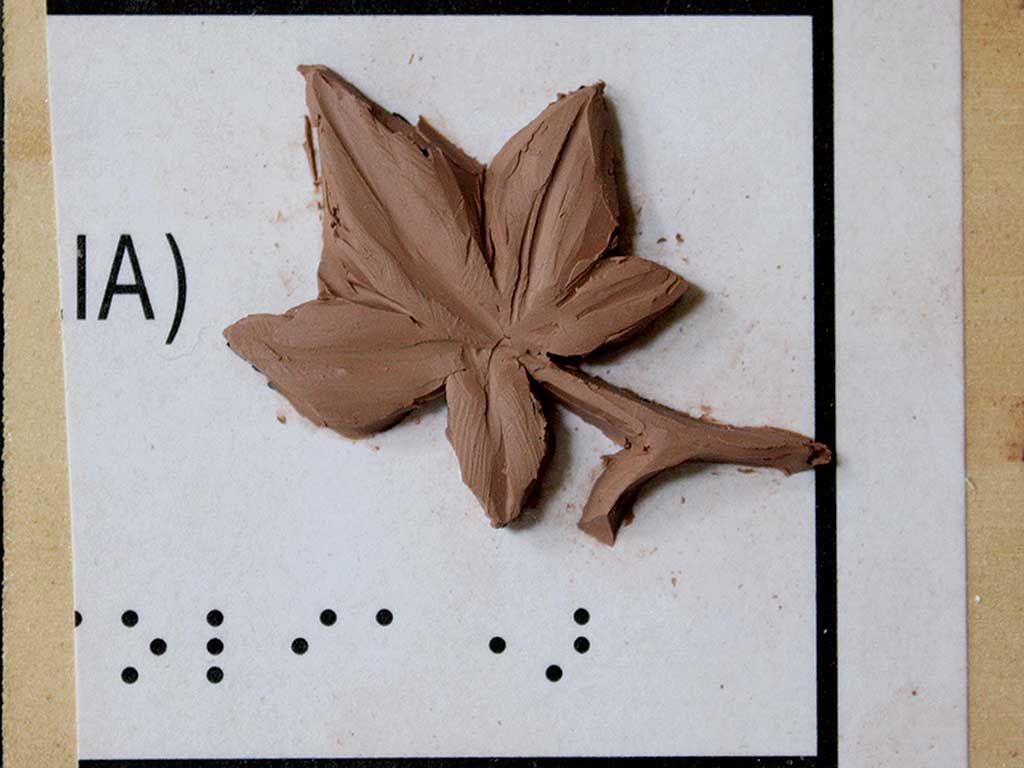