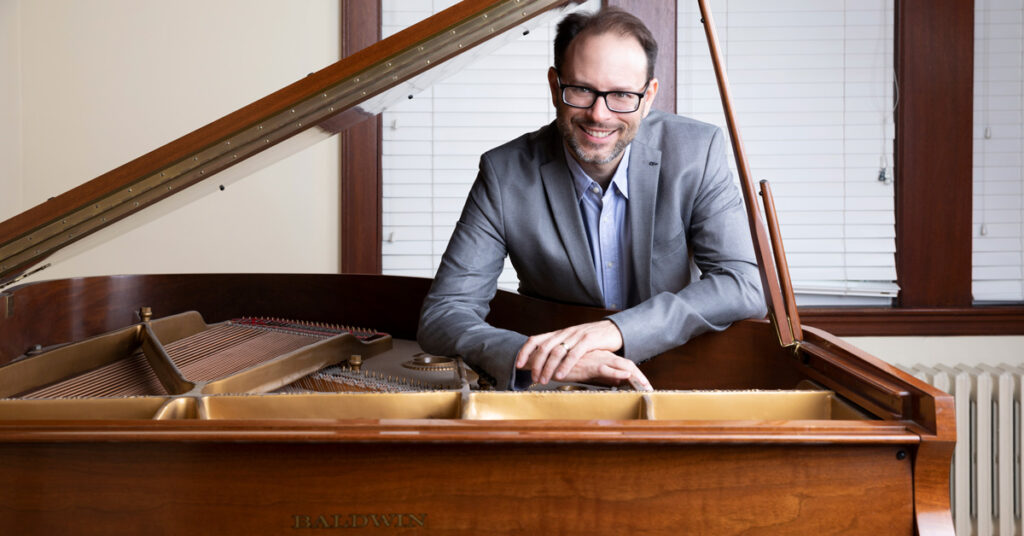 Associate Professor of Music Delvyn Case treats every student who walks into his “Introduction to Composition” class as a composer, whether or not they have ever written a note.

“I tell them that we are all on the same journey of learning how to compose, but just at different points,” he said. “The difference between them and me and Mozart is in the degree to which we all have mastered the art of composition, not whether we are composers.”

Case recently hit a high note on his journey when he was named Distinguished Composer of the Year by the Music Teachers National Association (MTNA) for his piece “Psalms of Ascent,” a five-movement instrumental suite inspired by the Biblical Psalms 120 through 134. These Psalms, known as the “Songs of Ascent,” are believed by scholars to have been used by Israelite pilgrims as they journeyed to Jerusalem for religious festivals, he explained.

The award is given to the composer with the strongest composition out of all the works commissioned by MTNA state affiliates in a given year. Receiving this honor, which came with a $5,000 award, is particularly meaningful to Case.

“I was recognized for the very thing I teach at Wheaton, and from a group of my peers who are also composers and teachers,” he said.

The suite was commissioned by the Maine Music Teachers Association, which was an additional honor, said Case, who grew up in the state and maintains musical connections there.

Case, who has taught at Wheaton since 2010, hopes his award can serve as inspiration for students. In addition to composition, he teaches classes on music theory, songwriting and the history of popular music. He also is the music director of the Great Woods Symphony Orchestra, an ensemble based at Wheaton that includes members of the college community and the general public. On June 23, Case will be the conductor for the Symphony Under the Stars event to be held in the Presidents’ Garden.

The professor said he is grateful for the summer research award from the college that funded a professional video recording of “Psalms of Ascent” by the Boston-based ensemble Hub New Music.

“The college supports its students and faculty in numerous ways, resulting in the creation of hundreds of new works every year—from student poetry to faculty compositions,” he said. “The result is a campus where the arts are not only celebrated in principle, but also in practice.”