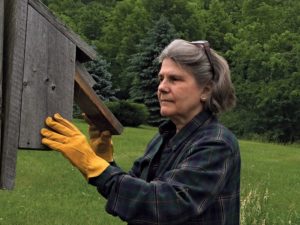 Two passions fuel Leslie Sharpe ’68, from her time as a student at Wheaton until now: a love of writing and admiration for the natural world.

She combines both of these loves with the publication of her latest book The Quarry Fox and Other Critters of the Wild Catskills (Overlook Press, 2017)—a nonfictional lyrical account of wildlife that reside in the Catskill Mountains in southeastern New York.

“My aim is introducing readers to wild animals, and their habitats, to get people interested in these critters so they care about them. That is the first step in caring about—and preserving—our natural world,” Sharpe said.

The book is making waves. New York Times book critic Sam Roberts described it as “a poignant and modern reminder of untamed creatures so close to home.” 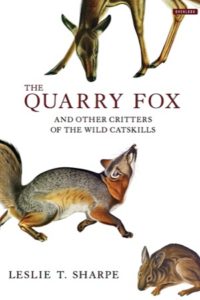 Before writing this book, Sharpe worked extensively in publishing and academia. She began her career at publishing house Farrar, Straus and Giroux (supervised by Susan Sontag, a well-known writer and activist), and eventually wrote Editing Fact and Fiction: A Concise Guide to Book Editing (Cambridge University Press, 1994). She also contributed personal essays to publications including New York Newsday, Village Voice, The New York Times and Albany Times-Union, among others.

Her experiences at Wheaton, where she majored in ancient Greek, inspired her career pursuits.

“When I told my undergraduate thesis advisor, and revered Latinist, David Bishop, as a junior, that I wanted to write when I grew up, he assured me that I could not have chosen a better field of study for that purpose,” Sharpe recalled. “Traditionally, many writers study the Classics, both for language and literature, the foundations of Western culture. And to this day, my primary writing ‘mentors’ are Plato for prose, and Homer for poetry.”

She also credited Doris Bishop, then head of the Classics Department, for instilling in her rigor and discipline, which serve writers well.

Sharpe’s love of nature began at a young age. Her father had always called her “nature girl,” she said.

“One of the things I loved most about Wheaton was the Wheaton Woods, where I could take long, reflective walks,” she said.

Later in life, she served as vice president of the New York City Audubon Society, and as editor of The Urban Audubon.

With Quarry Fox, Sharpe hopes to promote connectedness, and to show the delicacy of the “web of life;” and how sustaining natural resources makes economic and political sense.

What’s next for Sharpe? In addition to writing a memoir and children’s poems, she is gearing up to write a sequel. This time, bluebirds will star in her new work.