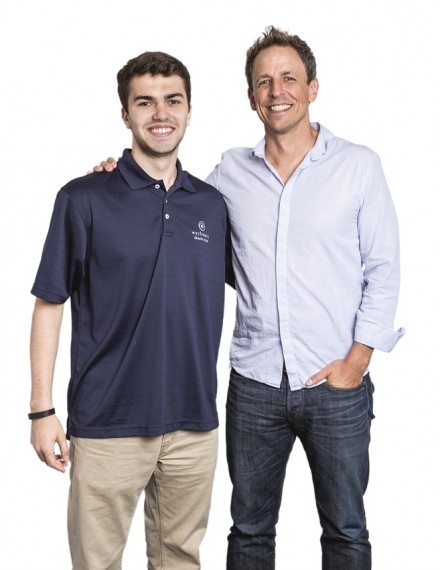 Each summer, Michael Sadowsky ’18 manages to scout out and initiate his own opportunities for internships, which have provided the film and new media studies major with valuable experience in the entertainment industry as well as brought him face to face with celebrities. In 2014, he interned at Atlas Talent Agency in New York City, working in various roles. In 2015, he was at talent and literary agency ICM Partners in New York as the theater and concerts intern, landing the position with the assistance of Ben Chalot, associate director of career services in the Filene Center, who pointed Sadowsky to alumna and executive vice president at ICM Esther Newberg ’63. (She sent his resume along to the HR department, leading to a phone interview and internship.) In summer 2016, Sadowsky got a position as the production intern for “Late Night With Seth Meyers” in New York City. (Sadowsky and Meyers are pictured here.) So, what’s his secret to creating not-so-obvious opportunities? First comes love: “I can’t imagine anything more boring than being stuck in an internship you don’t have any interest in. My process of figuring out what I liked started in high school. I took a step back and tried to see what parts of school I really enjoyed. It happened to be English and the arts. From that point I started to get interested in the entertainment industry. I wanted to see what was behind the curtain.” Then, friends and family: “Look at your inner circle of family and friends and see whether anyone is connected in any way to the industry you are trying to get into. This is always a good starting point. It is a lot easier to be introduced to someone rather than introducing yourself. Use the resources around you.” Put your Wheaton resources to work: “Being at Wheaton has awesome advantages. Wheaton has amazing alums, who feel deeply connected to this community. Make an appointment at the Filene Center to see which alums are currently working in the field you’re interested in and email or call to introduce yourself. That person might be able to get your resume seen by the right people.” Hello, you don’t know me but…: “When all else fails, cold-calling or emailing people you don’t know yet or have a connection to can be your best friend. You can find people on LinkedIn, or go to company websites to find those who might be able to help you.”