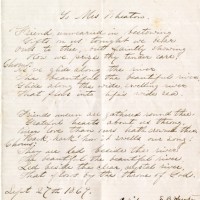 Glowing notes of appreciation, and songs in her honor, are testament to Eliza Baylies Wheaton’s commitment, pride, and emotional investment in Wheaton. As the family member with the longest involvement, Eliza Baylies Wheaton established a strong personal connection to the Seminary.

Mrs. Wheaton was often on the Seminary campus, not only for business matters but also to in support of its activities. In her diary entry for February 26, 1873, Mrs. Wheaton writes that she attended a Tableaux and reception by the class of 1873. The next month, she notes in her March 4 entry, “James T. Fields gave a lecture on Tennyson in Semy 2 1/4 PM. It was delightful”. Mrs. Wheaton’s presence on campus was noted and frequent. 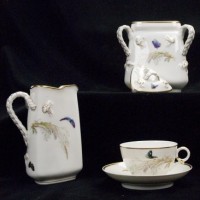 These entries are typical of Mrs. Wheaton’s activities. She hosted tea for each graduating class, presenting each graduate with flowers. When a student needed financial assistance in order to continue, Mrs. Wheaton stepped in. Students were frequently invited to take tea with Mrs. Wheaton or accompany her on outings, such as buggy rides. Mrs. Wheaton even invited students to join her on trips to Boston, especially when her niece, Mary Chapin, was enrolled in the Seminary. 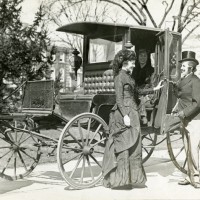 “Dear Mrs. Wheaton,
One of the most delightful features in our lives as school girls at Norton, was the assurance of hearty interest in our welfare which you constantly expressed in word and deed.

As one by one we have gone out from the Seminary, we find this love of yours for us and for the school, the golden thread coming down through the years and uniting the oldest and the youngest of the daughters of Wheaton Seminary in one common interest.”

From a letter written by: Martha C. B. Chase, Clara M. Pike, Frances V. Emerson, and Ella A. Norcross

As a result of her long connection with Wheaton, the school instituted Founder’s Day on her 80th birthday. Although Eliza Baylies Wheaton was not the only family member involved in the Seminary, she was the most visible, the most connected, and the most treasured by the students of Wheaton Female Seminary.