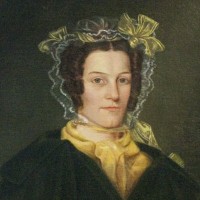 Very little documentary evidence exists regarding the individual in whose memory Wheaton Female Seminary was founded. Elizabeth Frances Wheaton was born on April 15, 1795. She was the oldest surviving child of Judge Laban and Fanny Morey Wheaton.

Judge Wheaton doted on his only daughter, and was pleased by her marriage at the age of 29 to Dr. Woodbridge Strong, a prosperous Boston doctor. Although it is not certain how Eliza and Woodbridge met, it is possible they were introduced through their brothers, who served together in the Massachusetts legislature.

As a belated wedding gift, Judge Wheaton purchased property on Winter Street, which he planned to turn over to the Strongs. It became his home for a time when, in 1833, Judge and Fanny Wheaton moved in with the Strongs to care for Eliza. Nevertheless, after a long illness, Eliza died on March 25, 1834.