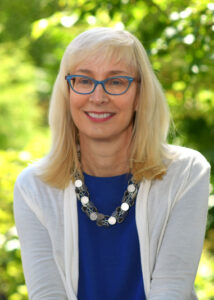 Michaele Whelan, an experienced and energetic higher education leader and a scholar of English literature, took office as the ninth president of Wheaton College on January 1, 2022. In her leadership roles, Whelan has excelled at collaboratively developing academic programs that address evolving curricular and student needs while strategically advancing the institutions she has served.

Whelan came to Wheaton from Emerson College, where she served as provost since 2013. During that time, she developed a reputation for increasing academic and inclusive excellence and equity through a broad array of initiatives. She is credited with encouraging a culture of collaborative pedagogy, fostering innovation in teaching, supporting research and creative work, deepening connections of the liberal arts with the professions, and increasing the institution’s global capacity.

While serving as provost, Whelan played a critical role in advancing the new Marlboro Institute for Liberal Arts and Interdisciplinary Studies—a result of Emerson’s alliance with Marlboro College—thereby enhancing liberal arts offerings at Emerson and contributing to Emerson’s financial strength. She also oversaw development of a portfolio of global programs offered in partnership with institutions in Australia, China, France, Spain and Switzerland.

Prior to joining Emerson, Whelan worked with school deans, faculty, students, staff and trustees to shape an academic vision and academic priorities for Brandeis University and Tufts University. During her tenure at Brandeis, where she served as Vice Provost for Academic Affairs, Whelan played a leadership role in launching and managing academic initiatives and accreditation, creating programs in graduate professional studies, working with colleagues on diversity, and fundraising with the Brandeis National Committee. At Tufts she served as Associate Dean of Academic Planning and Innovation in the Schools of Arts, Sciences, and Engineering. She also served as Assistant Director of Undergraduate Studies in the Department of English and American Literature at Harvard.

In addition to administrative leadership, Whelan has been an active teacher and scholar.  Her area of expertise is modern and postmodern American literature with a focus on gendered narratology. She has taught at The Pennsylvania State University, Harvard University, Tufts University and Brandeis University, receiving teaching awards from Harvard and Penn State.

Whelan is a leader beyond campus, too. She currently serves on the Executive Committee of the New England Commission on Higher Education, the region’s institutional accreditor for colleges and universities. She also has been a frequent contributor to and participant in educational conferences and leadership groups, including the Board of Directors for the Association of Chief Academic Officers (2016‒19); the ProArts Consortium; the bi-annual Colonial Group meetings of the provosts of 13 research universities, which she coordinated when she was at Brandeis (2007‒2012); the ACE Commission on Internationalization and Global Engagement (2014‒2017); the ACE Network of Women Leaders in Higher Education (2002‒2012); the Schusterman Center for Israel Studies Summer Institute (2008); New England Resource Center for Higher Education Academic Affairs Think Tank (2007‒2008); and the Aspen Institute.

The appointment of Luis F. Paredes, Ph.D., who has broad experience as an administrator promoting equity and social justice and as an educator and scholar,…

A midsummer’s update from campus

An update from President Whelan to Wheaton College alumni, parents and families.

Reflecting on the overturning of Roe v. Wade

Wheaton remains committed to social justice and seeks to foster a diverse, safe and healthy community where each individual’s rights are respected and their contributions…

The appointment of Touba Ghadessi, an early modern historian of art and of anatomy and an advocate for the humanities, as Provost and Vice President…