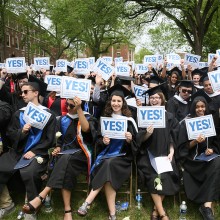 Wheaton College celebrated its 181st Commencement on Saturday, May 21, 2016, with alums, friends, family, staff, faculty and trustees sending off the Class of 2016.