Wheaton College’s commitment to addressing issues of sexual assault and fostering a campus environment free from discrimination includes coordinated response to reports of misconduct; extensive training for faculty, staff and student leaders; education and awareness programs for the campus community; continual review and updates of policy and procedures; and the biennial symposium on Violence Against Women, established in 1983. Recently, the college was awarded another three-year, $300,000 grant from the U.S. Department of Justice to develop programming that addresses sexual violence. This is Wheaton’s third time receiving the grant which was initially awarded in 2012.

The work is ongoing. Here is an update on some of what we as a community have accomplished since receiving the first grant:

This is what happens when an entire college community gathers together to address the complex problem of sexual assault and misconduct on campus.

What Happens When is an original play, an educational approach and a pilot program that can be adopted by colleges and universities across the country. 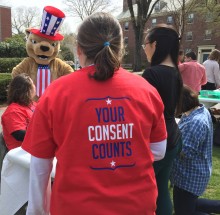 If you would like to get involved in the education and awareness efforts on campus and hear about upcoming events and activities, send an email to: smart@wheatoncollege.edu.

Learn more about the LiveSafe app