Back to all faculty

He is also the faculty advisor of Farm House and WheaFarm, Hungry Lyons, and Interfaith House, Wheaton Hillel, and a committee member of the Network for LGBTQ+ Inclusion, Support, and Advocacy.

Much of my research is focused on meals and religion. I’ve presented papers on Jewish meals for the Association for Jewish Studies and at the Brown U. Colloquium on Religions in the Ancient Mediterranean region. I have participated in numerous national conferences, such as the 15th Annual Klutznick-Harris Symposium on Food and Judaism in Omaha, NE, the international Oxford Symposium on Food and Cookery, and was on the Steering Committee of the Society of Biblical Literature research Seminar “Meals in the Greco-Roman World” from 2002-2010, and on the Steering Committee of the Folklore and Religion Seminar of the American Academy of Religion. 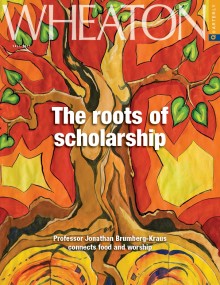 My translation of Shulhan Shel Arba, a treatise on eating by the 13th century Spanish kabbalist and Biblical exegete Rabbenu Bahya ben Asher, is available on line here. Rosemary Liss ’11 composed seven original illustrations for the translation, which can be seen here. I’m currently working on a book on the history and culture of Jewish food, that looks both at what Jewish sacred traditions prescribe about food and meals, and what Jews actually eat and think about them. In the Fall 2011 Wheaton Quarterly article “Food, God, and Scholarship,” I describe how my research and teaching on food connect. These are not just antiquarian or Jewish issues, but in fact are one set of possible answers and strategies for a basic feature of the human condition, what in his new book Michael Pollan calls The Omnivore’s Dilemma (Penguin, 2006). Given the wide range of foods we are physiologically capable of eating, we constantly have to decide what is good to eat. Thus, human beings compose and use narratives that make food, in the words of Claude Levi-Strauss, “not only good to eat, but also good to think.” How similar and how different in purpose are the Jewish medieval texts from contemporary narratives about food that we find not at the table, but in grocery stores, the stories we tell or which are implied in the labels “organic,” “halal,” “vegan,” “kosher,” or “low carb”? 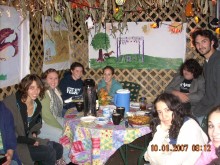 Aren’t we telling stories about our food because, as Pollan says, “it gratifies some of our deepest, oldest longings, not merely for safe food, but for a connection the earth and to the handful of domesticated creatures we long depended on…to ‘engag[e] in authentic experiences’ and imaginatively enact…a ‘return to a utopian past with the positive aspects of modernity intact'”?(p.137) When R. Bahya has his readers frame the activities of the meal within the sacred drama of Adam and Eve’s fall, the revelation at Sinai, and the messianic banquet on the flesh of Leviathan, 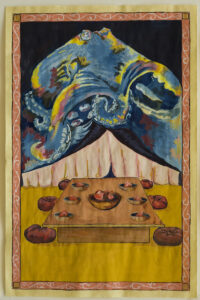 or when the Passover Haggadah’s stories and pictures evoke memories and visions of the utopian redemption from Egypt as we eat the bitter herbs and sweet haroset, or when Christian and Jewish sages counsel us to “eat the book”, to ruminate, chew on the words of God to restore our exalted status that we lost when the first man and woman sinned and ate what they mistakenly thought was good to eat – aren’t they intending something quite similar? In their own way, they are prescribing a remedy – certain kinds of reading, sometimes on an empty or full stomach, but definitely at the table – for the omnivore’s dilemma. In 2005 I participated in an NEH Summer Seminar on Religious Diversity and the Common Good, led by Boston College Professor Alan Wolfe, to gain a deeper understanding of the current American cultural situation in which I’m doing my research and teaching.

FSEM 101-A08 The Rituals of Dinner (part of the Connection: CONX 23002 Food), REL 102 Introduction to the Study of World Religions, REL Introduction to the Comparison of Religions, REL 109 Introduction to the Hebrew Bible, REL 110 Literature of the New Testament, REL 204 Scripture in Judaism, Christianity and Islam, REL 207 Introduction to Rabbinic Literature REL 208 Religion in Modern Literature, REL 210 Jesus and the Gospels, REL/WGS 219 Gender and Violence in the Bible, REL 232 Faith after the Holocaust, REL 235 Mental, Physical, and Spiritual Well-Being from a Comparative Religious Perspective, REL 310 New Testament: Acts and Letters, REL 316 Islam: Faith and Practice, REL 322 Judaism: Faith and Practice,  REL 323 Seminar in Jewish Thought, REL-365 Smells and Bells: The Sensual Dimension of Religion I have offered enhanced sections of some of my courses to study texts in Hebrew or Greek. (Contact me if you are interested.) I am interested in experiential and service learning and received a Shouse Fellowship for making an oral history project (interviewing members of the local Muslim community) part of my course Islam: Faith and Practice. I’m very interested in having students make the connections between the critical comparative study of religion and their experience in “the real world.” A good example of the kind of discussions we have in class can be viewed on the blogs for my Religion 204 course “Scripture in Judaism, Christianity, and Islam”  and Religion 365 “Smells and Bells: The Sensual Dimension of Religion.” I’ve collaborated with colleagues in the Biology Department, Professors Betsey Dyer and Deborah Cato, to connect their First Year Seminars with with my FYS (First Year Seminar) “Rituals of Dinner: (see the cover story in the Winter 2008 Wheaton Quarterly), with Theater Department Professor Stephanie Daniels to connect her FYS (First Year Seminar) “Theater and Social Change” with “Rituals of Dinner,” and with  Professors of Biology Jessie Knowlton, Sociology Justin Schupp, and English Kent Shaw in the FYE (First Year Experience) “Food for Thought.” 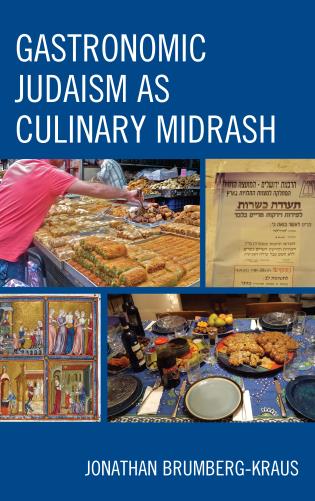 Memorable Meals: Symposia in Luke’s Gospel, The Rabbinic Seder, and the Greco-Roman Literary Tradition, which  can be accessed on-line, in which I compare early Christian table fellowship with the Jewish Passover seder.

Shulhan Shel Arba by Rabbenu Bahya Ben Asher Hlava. Translated with commentary, with illustrations by Rosemary Liss, Wheaton ’11 (2010- ) here and without the illustrations in Sefaria . 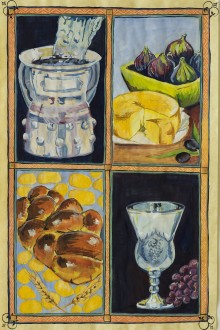 For the Summer of 2010, Rosemary Liss ’11, a Studio Art major and “alumna” of my FYS: Rituals of Dinner, and I received a Mars Faculty/Student Research Grant from Wheaton for the project “A Contemporary Illuminated English Translation of Rabbenu Bahya Ben Asher’s Jewish Eating Manual Shulhan Shel Arba.” Rosemary composed seven original illustrations for the translation.

In 2015, Ciara Sidell worked as my research assistant to help me revise and edit my book manuscript on Jewish food which was published in 2018.  Also in 2015 I worked  with WheaFarm students Giovanna Bishop ’17 and Evania Thompson ’18 to promote education about non-animal based whole foods and  to learn fermentation and canning with the support “Get Real Get Raw” Faculty/Student collaborative grant from Wheaton.  And in 2016, Biology Professor Betsey Dyer and I received an IMAGINE Grant from Wheaton for our “Fomenting and Fermenting” Faculty/Student collaborative project with Choening Dorji ’18. In 2019, Wheaton Religion Department major Anastasia Kranz ’20 and I researched and designed  the course REL 235 Mental, Physical, and Spiritual Well-Being from a Comparative Religious Perspective.