Back to all faculty

I have taught at Wheaton College since September 1979. During that time my research interests have varied. For several years I wrote about economic crisis theory and the effect of government taxing and spending policies on economic crises. I also did research on Marxism and Feminism and on women’s unemployment patterns and how they differed from those of men. That research was inspired by Wheaton’s efforts to integrate “the new research on women” into our curriculum. In the late 1980s I became interested in anti-speculation taxes and in particular the Land Gains Tax in place in Vermont. During the 1990s I began studying rapid growth in Southeast Asia and its effect on poverty and working people. In 1996 I spent the year in Southeast Asia as a Fulbright Research Scholar Research working with James Goodno, an economic journalist, on that project and with the Southeast Asia Office of Oxfam America.  We visited and worked with non-governmental organizations and poor peoples’ movements in Malaysia, the Philippines, and Thailand.

In addition, to my teaching at Wheaton, academic research, and my work with Dollars & Sense magazine, I have been active in several political movements. During the 1980s I was part of the Providence, R.I -Niquinohomo, Nicaragua Sister City Project and worked in Nicaragua for two summers. I currently work with United For A Fair Economy (UFE), a Boston-based economic justice group. I have made several radio appearances and some televisions appearances on behalf of UFE.  I have also worked with Boston Uncut,  the protest group that battles cuts in social spending and corporate tax dodging.  In October 2011,  I was part of a Dollars & Sense economic forum at Occupy Boston.

Another interest of mine is cycling, both recreational cycling and bicycles as an alternative means of urban transportation. I am a supporter of Bikes Not Bombs, a Boston-based group that works with inner-city youth refurbishing bicycles and then distributing them in Boston and in the developing world. I am also an active cyclist and an avid fan of bicycle racing. I have ridden several bicycle tours in New England, including the Mount Washington Hill Climb. Also a few years ago my partner Ellen and I toured Tuscany, Italy by bicycle. We loved it. 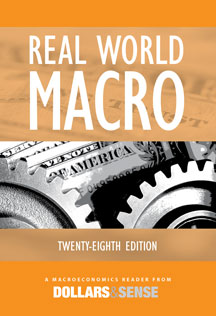 Second, for over two decades I have worked as a contributing editor to Dollars & Sense, a popular economics magazine, based in Boston, MA. I edit articles, edit and contribute to a classroom reader entitled Real World Macro, and write about macroeconomics and financial instability (e.g., the Great Recession and the sluggish economic recovery), tax and budget policies and globalization.  My column, Up Against the Wall Street Journal, concentrates on debunking economic claims made in the business press. Several of my articles from Dollars & Sense are available online and are listed below.

Also Arthur MacEwan, a founder of Dollars & Sense, and I recently published Economic Collapse, Economic Change: Getting to the Roots of the Crisis. The central argument of our book is that the economic crisis, which emerged in 2007, had its origin in a nexus of economic inequality, elite (undemocratic) power, and a perverse leave-it-to-the-market ideology that has developed over recent decades.  The substance of the book both traces the development of the crisis and explains how this nexus lies at its foundation.  Consistent with our analysis, we argue that to establish long-run economic stability it is necessary to alter the conditions of inequality, power, and ideology. While the focus of the book is the situation in the United States, we also examine the connections between the crisis and global events. In October 2011 I spoke with the Real News Network about our book and the current economic crisis.

You can learn more about the book or order a copy through the link provided by the title.

My current course offerings are below, each with a course description and the latest syllabus.:

Over the years I have directed several students’ honors theses.  Those students did impressive work. For instance, James Jarrett wrote an honor’s thesis on Aids in Uganda that assessed the effects of economic growth, world bank policies, and the presence of NGOs on the incidence of AIDS and the lifespan of HIV positive Ugandans.   Taavi Raidma’s thesis, Microcapitalists or Debt Prisoners?, evaluated microfinance programs in Limpopo Province, South Africa.  Ryan Patch wrote about microfinance programs in Nicaragua in thesis, Mass Media and the Effectiveness of Microcredit in Nueva Guinea, Nicaragua.  Jake Maher’s thesis assessed the state of the U.S. middle class using the concepts developed to assess the sustainability a middle class in the developing world.  Michael Latner examined the social and economic provisions of Mercosur, the trade and development pact among Argentina, Brazil, Paraguay, and Uruguay.  And last year, Nick Kacher wrote Beyond the Big Tradeoff.   Nick’s thesis argues that rising inequality and declining social mobility in the United States has not been associated with gains in efficiency as is often suggested in the economics literature.

“Military Spending and Economic Crises: A Comment on Gottheil and Riddell,” The Journal of Post-Keynesian Economics, Winter 1987-88, Vol. X, No. 2.

“Interactive Computer Lessons For Introductory Economics: Guided Inquiry from Supply and Demand to Women in the Economy,” with Gordon Weil. The Journal of Economic Education, Spring l986.

Book Reviews and Other Short Articles

“Why the United States is Not Greece,” by John Miller and Katherine Sciacchitano, Dollars & Sense, no. 298, January/February 2012.

“The People’s Budget: A Plan to Get Deficit-Reduction Off Our Backs,” by John Miller, Dollars & Sense, no. 296, September/October 2011.

“The Political Manipulation of ‘Missing Girls”, by John Miller, Dollars & Sense, no. 296, September/October 2011.

“No Fooling—Corporations Evade Taxes: Forbes finally notices what has been clear for years,” Dollars & Sense, no. 294, May/June  2011.

“Stimulating Whining: The prospect of bigger government sets some in the business press howling,” Dollars & Sense, no. 281, March/April 2009.

“Climate Reality Eludes“How I Learned to Stop Worrying and Love the Deficit,” the Business Press,” Dollars & Sense, no. 277, July/August 2008.

“Stormier Weather: The economic recovery is probably over—too bad many Americans never got to experience it,” Dollars & Sense, no. 274, Jan./Feb. 2008.

“Free, Free at Last: Economic freedom for corporations has little to do with either political freedom or economic growth,” Dollars & Sense, no. 258, March/April 2005.