The Visual Perception Lab at Wheaton College is run by Professor Rolf Nelson and is located in Mars Center for Science and Technology 1112.

A number of research topics within visual perception are explored in the lab.

In this research, we explore the way in which our minds are able to construct a world full of meaningful shapes, objects, and categories from the array of light that falls upon our eyes.  One particular interest has been in the area of the perception of visual holes — a case of figure-ground perception in which, unlike most situations, we remember the shape of the thing that is farthest from us, rather than the surrounding object. 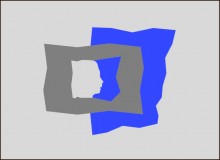 How is it that we manage to select the most relevant information from the barrage of data that is constantly flooding our senses? We as humans have some very sophisticated cognitive apparatus that manages to sort out what we need to perceive and remember, but this often comes at a cost of neglecting most of what goes on in the world.

We have explored some ways that video games can affect perception and cognition.  In one project, we found that playing first person shooter games can prime fast but less accurate responses, while playing more deliberate games can prime slower but more accurate responses in a subsequent test.  Other projects have worked on the physiological effects of playing different kinds of video games, longer term effects of gaming, and the effect of playing video game on moral decision making.

Volunteering in the Perception Lab