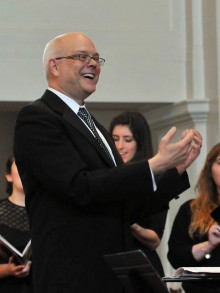 Tim Harbold is a versatile conductor and pianist, at home in a wide variety of musical styles. Under his direction, Wheaton’s Chorale and Chamber Singers enjoy exploring repertoire ranging from classical masterworks to world folk songs, spirituals, and jazz.

Though formally trained in classical music, Mr. Harbold has a special love of American vernacular traditions such as Gerswin-era pop and jazz standards and African American gospel and spirituals. His early professional experiences include work as cabaret pianist and as the director for a gospel choir at an African American church in Boston, and for several gospel choirs since. These experiences have led Mr. Harbold to arrange numerous spirituals, jazz standards and folk songs, which have been performed by groups such as the New England Conservatory Chorus and the Arkansas All State Chorus.  His arrangements are published by Hinshaw Music, Santa Barbara Music Publishing, and E.C. Schirmer.  As a pianist, Mr. Harbold specializes in American song, performing regularly with vocalist Valerie Anastasio.

At Wheaton, Prof. Harbold takes a special interest in supporting student singers, conductors and music directors. In addition to directing the choruses, Harbold teaches conducting and other classes, frequently serves as Music Director for musicals, accompanies the Chamber Singers at cabaret nights, and supports Wheaton’s a cappella groups as a faculty advisor and resource for their directors and arrangers.

Mr. Harbold studied music at Williams College, and conducting at New England Conservatory, where he was a student of Tamara Brooks and an assistant to Lorna DeVaron.