Recent Repairs to the Casavant Organ

Donations to the Carlton T. Russell Organ Fund are put to good use!

Income from the fund is used for restoration and renovation projects that are more substantial and costly than routine maintenance and tuning, which is included in the College’s budget. Over the last ten years, the Fund has enabled the completion of three major improvements to the Casavant: (1) Replacement of power supplies (2009); (2) Repair of façade pipes (2012-2013); and (3) Installation of a new solid-state combination action (2016-2017).

While the key action of the organ is entirely mechanical, the stop action is electrical. The stop knobs on the console, which switch ranks of pipes on and off, the solenoid motors, which move the sliders within the windchests, and the combination action, which allows the pre-setting and quick selection of stop choices, are all electrically powered.

In an evaluation carried out in 2008-2009, technicians from the Andover Organ Co., which services the Casavant, determined that the then 40-year-old power supplies were near failure and could not be repaired. Moreover, they judged all of the electrical systems to be underpowered. An outside contractor and College electricians brought new power supply lines into the organ chamber. The old DC rectifiers were removed by Andover and replaced with modern, solid-state power supplies. 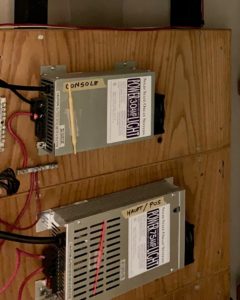 Of the more than 2500 pipes in the organ, 70 are displayed in the front of the case. They are speaking pipes and not merely decorative. The largest of these, in the towers on the left and right, play the lowest 10 notes of the 16’ Prinzipal in the Pedal division.

In the late Fall of 2012, several of these large pipes began to break around the pipe mouth, and by semester’s end, one of the pipes was bending and sagging. Andover removed all ten pipes and transported them to a pipe maker’s shop in upstate New York, where they were repaired and reinforced. Andover then fabricated a new suspension system that takes weight off of the pipe feet and reassembled everything before the end of the winter break. 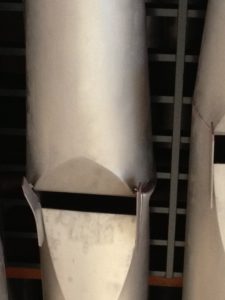 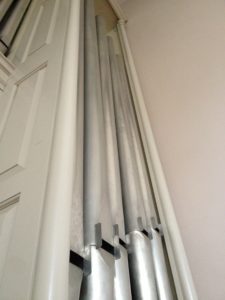 Left: Breakage at the ears, on the sides of the pipe mouth
Right: The middle pipe was sagging, bending backwards at the mouth 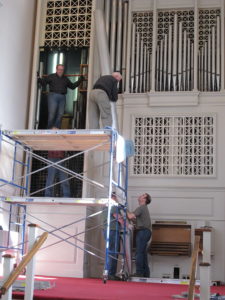 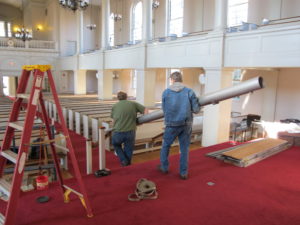 Technicians from Andover remove the façade pipes from the pedal towers

Lawrence Phelps, the designer of the Wheaton organ and Tonal Director at Casavant Frères, was, at that stage of his career, interested in emulating historical models, such as the mechanical key action of German Baroque organs. But he was also a forward-looking engineer who wanted to incorporate modern devices that assisted the player.

The combination action is the mechanism or circuitry that allows the organist to pre-select choices of stops and call them up as required during a performance. Unfortunately, the combination action that Phelps designed for the Wheaton organ was ahead of its time: a small computer before there was really the possibility of small computers. It used a magnetic core memory, similar to what mainframes of the day used to store data, before the advent of hard drives and chips. Phelps’ original combination action was unreliable even from the beginning, and within a year or two it failed completely. Casavant was asked to replace it with a system that worked.

The replacement was an electrically operated action of a type that had been in use for decades. It consisted of two setter-boards, matrices of dozens of tiny toggle switches. By turning the switches on and off, one could assign groups of stops to particular combination pistons (the push buttons located below the manuals and the toe studs above the pedals). But after more than 40 years of use, many of the switches deteriorated. The process of “programming” the setter boards was always tedious, but eventually became unreliable. 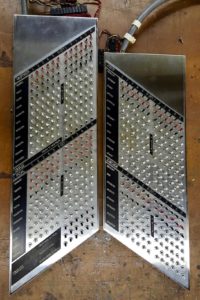 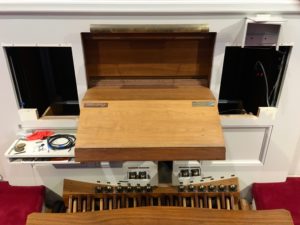 Left: The Casavant’s setter boards, removed for replacement by a new system
Right: The console’s stop jambs were removed so that the electrical switches behind the stop knobs could be replaced with up-to-date hardware

Andover installed a new combination action in early 2017. This type of system – a small, specialized computer with solid-state memory – has been standard among organ builders for the last 25 to 30 years. Now the organist can simply choose the stops for one piece or one section of a piece, hold a button called the “setter,” and press the desired piston. The stop combination then goes into the computer’s memory. Revising a particular registration is simply a matter of adding or taking away stops and pressing the setter and piston again.

Moreover, the new system has 100 levels of memory. All 40 or so pistons on the organ can be programmed in a particular way in one level of memory, and in other ways in each of the remaining 99 levels. Different levels can be assigned to different pieces, different performances, or different organists. The levels and the piston numbers are shown on a small panel mounted on the right-hand stop jamb. 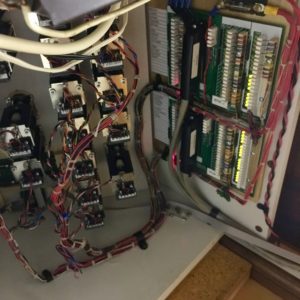 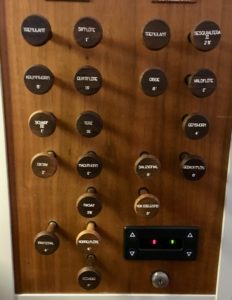 Left:  The new electrical switches attached to the stop knobs (left side of photo) and the combination action “black boxes” (right side of same photo)
Right:  New indicator lights for memory level and piston number (lower right of photo), along with sequencer switches to move up or down one level and/or one piston number

Pipe organs are complex instruments  requiring ongoing maintenance and repair over time.  In their most recent full review of the organ, Andover Organ Company recommended over $100,000 in maintenance projects in the coming decades.  We have undertaken a few of these projects, but there will certainly be costly repairs into the future.  The expected costs over time remind us that the Russell Fund serves a vital role in guaranteeing that health of our treasured Casavant Organ!

We welcome your donations to the Carlton T. Russell Organ Fund!